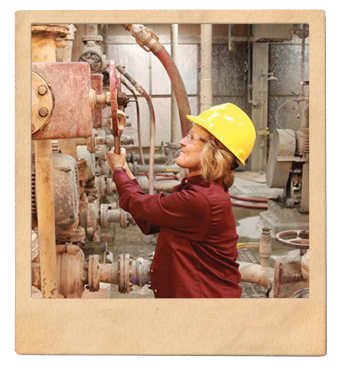 “To support the war effort some two thirds of the force women were women. Many of these performed jobs that up until that time had been held predominately by men. Approximately 4,500 people were employed by Fairbanks Morse during the peak years of war production.” -Fairbank Morse Memorabilia Room

Four different women from four different departments at Fairbanks Morse & Company, weigh in on the biggest challenge they have faced working in the male-dominated industry of manufacturing:

“Guys don’t feel like they represent the male species, but when you’re a girl entering a male—dominated area, that is how it feels. People don’t want to believe that girls can be engineers that well. Some of them are on board but others are just looking for me to confirm the idea that girls shouldn’t be engineers. It’s very important to do as well as you can because you’re breaking the way for everyone else. It’s more important for me to represent the female gender well for the next generation.”
Stender is aware that it is not only women having to break certain work barriers, and compares her experience to that of a male nurse, “Whenever you’re breaking barriers I would think you feel the same type of challenge. To be exemplary in whatever field you’re crossing over. .. My biggest challenge is I want to represent my gender well. I don’t want any guys to believe (women can’t do what I do) find an easy out. You’re not gonna find that easy out in me!”

“The biggest challenge I’ve felt is a pretty typical challenge for women in business, I’ve heard. There are time where if you’re in a meeting with a lot of guys and you say something and it gets kind of discounted and then (a man) says almost the exact same thing minutes later, and then gets told ‘That’s a great idea!’ So, there are times when I’m sitting there thinking, ‘Isn’t that what I just said?’ Why didn’t it get heard when I said it but when a male turns around and says almost the exact same thing it gets accepted.”
Sullivan feels this isn’t so much related to the manufacturing-world but more so the business world as a whole that all women still have to deal with today, “It’s a real thing. I used to think it was because I worked in HR, and people sometimes view HR as the police or the compliance cops… But I think it’s more than that based on how many other women (in different fields) tell me the same experience. It doesn’t happen often. But when it does, you notice and it hurts.”

Before being one of the few female machinists on the floor, Graves worked as the cosmetics counter manager for Lancôme at Elder-Beerman in Beloit.
“I’ve noticed that women don’t try to get in here because this place can be intimating. There are two other women my age that work on the floor, but otherwise it’s all men. I wouldn’t say it’s per say the company or others within the company that are holding women back, but it’s kind of the idea of ‘I’m a woman, this is a harder, tougher and more physically demanding job’ that I think is intimidating and keeps (women) from trying.
Everyone was very welcoming when I came here and I’ve actually gotten a lot of positive feedback. I’ve been told I’m real hard-working and because of me and my good work ethic it will be easier for other women to get in here. If anything, I kind of feel I’ve gotten more appreciation because I’m a woman and have shown such good work ethic and that I’ve proven myself- not that I had to prove myself.”

“We have a good number of females working here but it is definitely more male dominated. I came from the banking environment, so I was really nervous when I first started here because I didn’t know anything about engines… Now I know more about engines than I ever thought I would in my life so you learn so much. It was intimidating at first (because it was male-dominated) but everyone here is awesome.
We have women that work in our heavy welding area. Welding the actual blocks of the engine- these are big things they’re welding on. It’s also predominantly males that are working out there. But if that’s your passion and that’s what you’re good at then more power to you!”

Contact the RCHS Story Squad if you have any stories you’d like to tell. Either write yours in person at our Wall Exhibit at our Janesville campus, through our website form, tagging #HistoryInFocus on your Instagram post, or by contacting LeeAnn Severson, the Marketing Manager, at lseverson@rchs.us if you’d like to help collect these stories as a member of Story Squad!