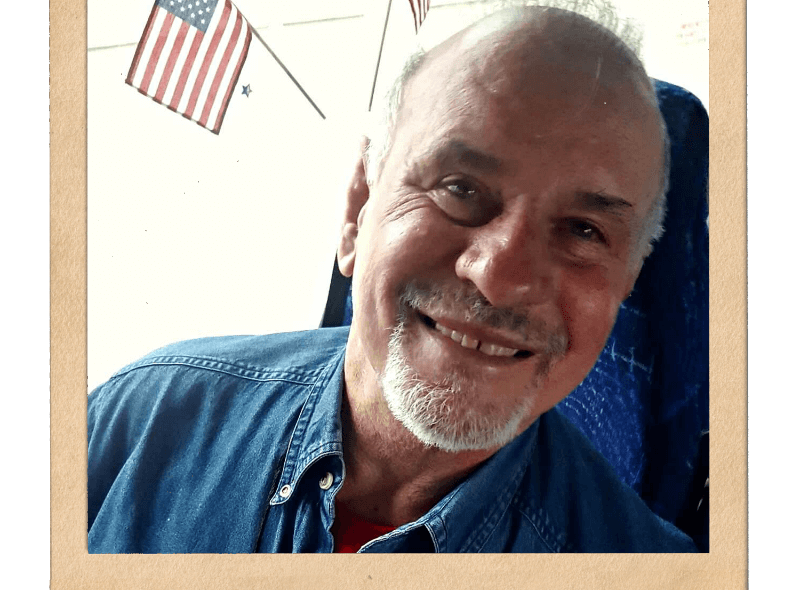 Tell me when you came to Janesville:

I was raised up on the Wisconsin River, but came to Janesville in 1968. I had lost my parents at an early age. I’m one of 14 siblings, 10 brothers and 3 sisters, all from all the same parents.

I had just finished up in the Navy and had been racing cars out in the desert of California. I’d had an accident and was torn up pretty badly after going underneath another car. I wasn’t expected to live and I even passed a couple of times, but then was in intensive care for two months.

At that time, I missed my family. I had two brothers living in Janesville working at the General Motors plant, so decided to come back from California.

Tell me about your work in the Rock County area:

So, I drove a truck for Gateway Transportation here and worked for 12 years until the company folded up. That was around ’84, so then I hauled corn to the river for the farmers until I bought my own truck. I had my own truck for 12 years and covered about 34 states. In ’94 I got a job at Conway Central Express and worked there for 15 years.

I’m a veteran, so I went up to the VA Hospital and they wouldn’t take me because they said the injury wasn’t war-related. So, finally, I called a state congressman who got ahold of someone in Milwaukee who got me into the VA up there. They found a bone chip underneath my kneecap and removed it. I retired from Conway in 2006.

Can you share some stories about your military experience?

I went to basics at Great Lakes in 1963. From there I went down to Jacksonville, Florida on TDI (temporary duty under instruction), for training assignments, which means you’re in transit. From there they flew me over to Spain. Then, I went to Morocco and had a layover for about a month there. From Morocco, in the latter part of ’63, I went on the USS Saratoga for 6 months.

I came back to the states to go to Jet Engine School in Memphis, Tennessee, to learn how to take apart and repair jet engines. I was in the Navy Air Force. Then, I went to Jacksonville, Florida, to another Jet Engine School and from there to California, when I was transferred to San Diego.

From California, I went to Vietnam on the USS Constellation; we called it “The Big Connie.” I was in Vietnam for about 6 months. We were relieved from Vietnam by another ship, and headed south toward Australia. I had always wanted to see Australia, but we made it as far as the Equator when the other ship broke down, so we had to turn around and come back.

Did you stay in touch with anyone from that experience?

When we came back stateside, everyone just looked down their noses at us. You know, we were kind of shunned … (Tears)

I was in touch with a guy named Tommy for a while. He was out of California. But, I lost track of everybody.

What did you think of the VetsRoll trip?

This brightened my time up, because when people come up and tell you, “We’re proud that you served for us,” it makes me feel better. I went through more tissues on this trip than I ever did in my whole life! And I would advise any veteran to take this trip because it is put together so well, and they take care of you so well. It’s so awesome, it’s just unbelievable.

Do you think you’ll stay around Janesville?

I have plans to; my home is here.