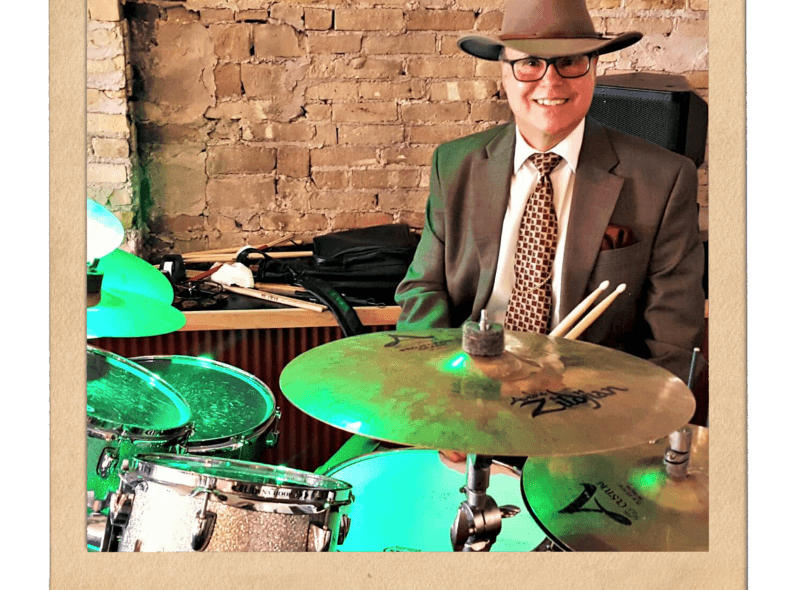 Tony Farrell, Sr. is the former owner of Voigt Music, Outreach Coordinator for the Coroner Medical Examiner’s Association, Volunteer Director of the Suicide Prevention Network and Safety Series, and a Neuroscience Researcher.

I’ve lived in Rock County for 68 years. It’s always been my home and it always will be. I have great memories of growing up here, the friendships and of the colleagues I’ve worked with. Some of my early memories were of when I started volunteering at a young age. My mother and father were strong believers in helping others. In junior high I started helping out farmers who needed some extra help. I would go help bale hay and other chores, and I really enjoyed it. Summers were always busy with volunteering. In grade school I started practicing drums through band and through the school system and stayed involved in music.

I went to high school in Evansville, where my band director was Dean Cretney. At that time I had started my own studio and I was the drummer in a band. We did a lot of charity gigs and such. Then I decided to go to Blackhawk Tech and received an Associate’s Degree in Marketing before being drafted into the military.

Rather than being drafted, I opted out and joined the Army National Guard here in Janesville, and then went on active duty for 6 months. When I returned, I spent 6 years in the military here in the National Guard. Then, I went ahead and continued my education.

Tell me about your Military Service:

My first day on the job was May 4th, 1970, which was the same day of the tragedy of Kent State University. I got assigned to a unit where the soldiers were coming back from Vietnam. There were a lot of tragedies, and all of that was new for me coming from my life in Rock County. Because I was in the National Guard, I got bounced around. At first I was at Fort Leonard Wood in Missouri. Then I was transferred to Fort Carson, Colorado. That’s where, at the time, they were sending the 10th and 20th Special Forces. That was their home base. So, I got associated with them and was involved in the Coroner Medical Examiners area on the base. That was my first exposure to the tragedies of suicide.

Tell me about your career in the music business and how that got started:

I had a small music studio in 1965 and started teaching lessons until about 1971. In 1970, I met a Ludwig Drum Company’s representative and I had become friends. He had mentioned that someone in Beloit needed a junior partner. That was Voigt Music on State Street in Beloit. So, I got involved in the business and here we are, still in business today!

In 1972, we opened The Bandwagon in Janesville, to give it a different name. That was on East Milwaukee Street. Then we decided in honor of Clinton Voigt, who started the business in 1939, we’d change it to Voigt Music Center. Later, it was moved to West Court Street.

I started calling on schools because Rock County didn’t have a music equipment dealer that went out into the communities. So I covered a really large area in Illinois and Wisconsin and was involved in going out and making school connections. I did that until my son decided to start organizing that on his own.

Tony Jr. has been involved in the business for 25 years or more and gradually took over the business. I wanted to spend more time in neuro research, in my volunteer work, because the programs had grown.

Tony (Jr.) decided to combine everything into one operation, so we expanded with Voigt Music Center, in cooperation with the gentleman that owns the building, here on Main Street.

Tell me about your education and career life:

I consider myself a “professional student” and I’m required to go to school for my two occupations because they’re licensed and board certified.

When I came back here from the military, I wanted to continue my education. I was trying to stay in the area, but the programs I wanted weren’t being offered here at that time. There was a program in Chicago and also in Milwaukee, so I traveled between them in order to become licensed in both states. I remember leaving when it was pitch black in the morning and it was still pitch black when I got home at night.

After my first Marketing degree, I received a degree in Business and then another degree in Addictions and then I went into Neuro Research. The latter two require board certification. Above and beyond that, I have received certificates in various programs.

When I got assigned to hospitals in Chicago, I would just stay there. The closest one I could find in Illinois was in Belvidere. I really liked the program there. I liked the doctor who was in charge of the program. At that time there were only 2 doctors in Illinois who had such a high rating in Addictions. I learned more from him than anyone in the field.

When I was in Illinois, I worked with several doctors doing research for them. Some I was helping with finances because of my business background, and others I helped in their particular field. One of them was the Coroner Medical Examiner’s Office in Illinois. He was a tremendously valuable person. I still work with some of these people that I’ve been with for 40 years now, doing research when called upon.

In 1973, I started working a bit up here in Rock County. In 1980, I decided I would volunteer my time. I’ve been with the Rock County Coroner Medical Examiner’s Department ever since. I spend approximately 30 hours a week and I pay all of my own expenses, so no tax dollars go to my work. I’m available to them 7 days a week.

Sometimes I get my assignments and begin at about 5 in the morning and don’t finish until 10 o’clock at night. And I continue to do a lot of public speaking at noon lunches, as well.

Tell me about your community involvement:

Currently, I’m also the Volunteer Director of the Suicide Prevention Network and Safety Series. I intend to do that the rest of my life. The program does not use any tax dollars as I continue to pay my own expenses.

I’ve also done security work for a lot of organizations. That started when I was in the military; there was a really strong Martial Arts School in Colorado. That was where the Special Forces were and they had mountain training, plus the snow, which you might not get in other parts of the country. My father was stationed in China in World War II and took Martial Arts. As a child, I wasn’t interested in learning much from my dad, because I was more interested in sports. But, I really got involved in it in the military. Eventually, I reached the black belt level. I still train 7 days a week and haven’t missed a day of training since once in 2015!

A lot of my early security work was out of Chicago, like when the celebrities would come in. I was given assignments to work security for these celebrities. We always had a suit on; I always looked like a business person, rather than ‘security’ so we didn’t stand out. We would escort the celebrities to their hotels and rooms and make sure they could get a break from autographs and such. I never encountered any incidents, mostly because the Chicago PD was always there in uniform. Sometimes people tried to cut in line and we would give them a choice to either be escorted to the back of the line or escorted off the property. We didn’t get any arguments.

I know we have a considerable heroin problem in our county. Do you see progress on this tragic situation?

This is not an isolated problem of Rock County. I have colleagues all over the U.S. and I talk to these individuals on a weekly basis. It’s simply a tragedy everywhere. I have very high praise for Rock County, for our first responders, our police officers, firefighters, 911 Communication Center, Crisis Intervention, our schools, Mobilization for Change, Rock County Board of Supervisors, Youth to Youth and all youth groups. Everyone is really trying to work together to eliminate all tragedies. The doctors are really looking into their end of it, as well. As people become more aware of the problems, the better we can work together to solve them.

The Rock County Suicide Prevention program began around 10 years ago. At that time, we saw the numbers double very quickly. We became very active in the network of all these organizations working together. We are all working to reduce the tragedies. And we have seen reductions. All of Rock County, each city, township and village is working together, each with their programs; to do the best they can to prevent tragedies.

I’m always very grateful for the lives that have been saved. But, one tragedy is one too many.

Time is of the essence in saving lives, so call as quickly as possible.

I’m so proud of Rock County. It offers so much. One thing I’ve been able to see, is like when the General Motors plant closed, I noticed the resilience of the people in our county. I saw everybody working together. I had seen that years before when Beloit Corporation went down, and so many were employed there, and then a new company came in.  The whole county has been very resilient, because every community has seen something going on; the Flood of 2008 and the big recession. But, there is incredible resilience in our community.

Tell me about your family:

I’ve been married to Londa for 48 years now. She has really been the pillar of strength in our family. I’ve been through a lot, from tragedies in the service and various personal challenges; she has always been there and been a comfort to me in my times of stress. She has straightened me around. Londa has also assisted me in my volunteer work and accompanies me to my speaking engagements.

We have our son Tony and our daughter Jessica and our grandchildren who live in Rock County. That’s another big reason we plan to stick around. This is our home…for all of us.

I love Rock County; it’s a great place to live.