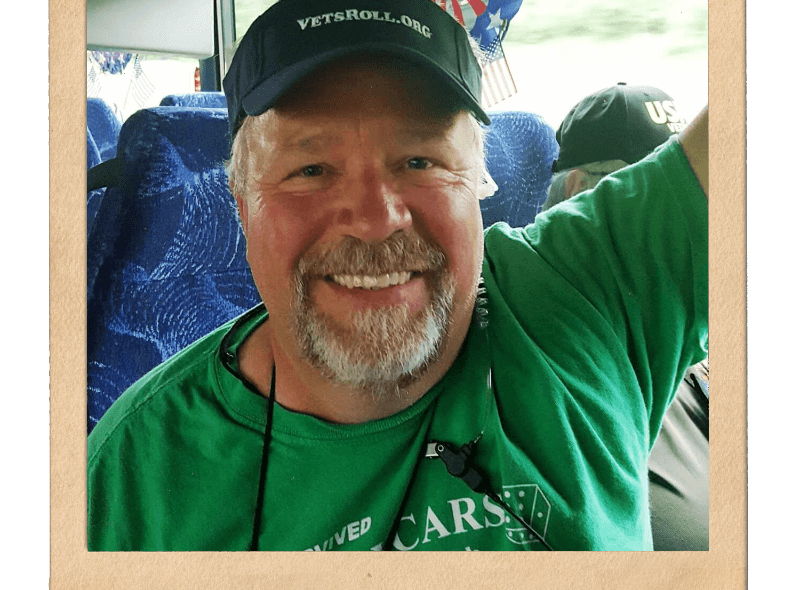 I’ve been around here since about 3 years old. We lived in a Janesville address, and if we had lived across the road, we’d have gone to school in Janesville. But, as it was, we went through school in Milton.

I played drums ever since I was little. When I was 8, I had a 24 year old brother who was a drummer, and he passed away, so I became interested in drumming. I picked it up and played all through high school.

I was also into sports; played football in high school and was an All-Conference Lineman. I played for Coach Jerry Schliem, who was a 2003 WFCA Hall of Fame Inductee. I went to college for a year, which was a lot of fun, but a “failed experiment.” I always tell people I made the Dean’s List, just not the right one. Mine was the one that told me to not come back.

After that, I played in various bands around Janesville. I was in a band called Southbound, then in Crackers, Small Talk, and after that I spent almost 4 years playing with Rainbow Bridge. The time I was with them, we toured on the road a lot for about 2 and half years, playing Holiday Inns, Ramada Inns, mainly. That was one of the best times in my life. I’m still friends with them, and jam with those guys once in a while.

I met my wife who is from Clinton and decided to get married. We were married 9 months when she was diagnosed with cancer, she had Large Cell Lymphoma. Her treatments left us without children, so we spoiled our nieces and nephews and are still very close to them. Now we have great nieces and great nephews. They’re pretty special kids.

Tell me about your work in the area:

Coach Schliem gave me an opportunity to coach on his staff as a volunteer for a couple years, and then I coached football for many years after that. I had worked at Lab Safety Supply for a while when there were only about 60 employees, and I worked at Simmons Mattress Company for a time. But, the factory life just wasn’t for me.

My brother drove a truck and he knew where I’d be playing with the band, so he’d try to pick loads that were going there. He’d always try to come see us play, whether we were in Indianapolis or in Iowa or wherever we might be. I mentioned that I wouldn’t mind doing that, since I always drove the truck for the band, hauling the equipment.

Then, one day my brother stopped out to the house and asked me if I’d be interested in buying a semi and hauling cars, so I did that for the next 18 years. We were owner/operators out of a railhead in West Chicago. I did that from 1992 to 2010. Then I did both the bar and driving for 11 years.

How did you start your bar & restaurant business?

In 1999, some friends of ours, his wife was in our wedding and my wife was in their wedding, went into partnership with me. You know it’s easy to call your friends up to have them come and tear stuff apart, but when it comes to starting up new stuff, and investing money in something, we didn’t have a lot of takers. So I called him up and we started the business. They had 4 small children, so around 2007 it got to be too much for them, and we agreed to buy them out.

We have comedy nights in there from October through March, and now we have singer/songwriters from Nashville coming up to do acoustic gigs. Between the music and different events, it’s grown, we can seat 60 people, and it’s intimate, like small Nashville club, like a comedy club. We’ve sold out probably 95% of our comedy shows and all of our music shows. Rick Huckaby, who co-wrote “Beer with Jesus”, a #1 Hot Billboards song, (appeared) on May 31. Through promotions and such, we have a lot of motorcycle rides come through there.

It’s worked out great for us. It’s a lot of work, but I like getting up and going to work every day, so that’s a blessing. I get to be out front and do all the stuff with the people, but my wife is the one who actually runs everything. She does all the books and orders; she’s a very busy lady. Boxcars Pub & Grub is located at 108 Allen Street in beautiful downtown Clinton, Wisconsin.

How did you get involved in VetsRoll?

I first met Mark Finnegan, founder of VetsRoll, at Cougar Lanes bowling alley in Clinton. They were having a VetsRoll fundraiser and I had gotten there late. Then I ended up winning the 50/50 raffle, which was $330 or something, and I just donated it back.

My first trip with VetsRoll was in 2012, I believe. My aunt and uncle inspired me. My uncle was in the Battle of the Bulge in Germany, and my aunt was a Rosie the Riveter (working in place of the men who left for the military. The Rosies helped with the war effort during WWII). I’d been after my uncle for years, so one day he and his wife finally went and I was lucky enough to go along as an assistant. The last 3 years I’ve been a bus leader.

It’s a great organization to be involved with. I go with Mark every year down to get the motorhome that we call “The Mothership.” Even if I don’t go on the trip, I’ll always keep fundraising.

What changes have you seen around the Rock County area?

Probably what people talk most about is the General Motors plant. Having backhauled out of there, and a lot of their drivers came down and backhauled out of our place, we knew the workers and some of their friends. So, we were sad to see those guys lose their jobs.

But, in the same sense, in Janesville there was kind of a stigma with it, for those who didn’t work at General Motors, like if you didn’t work at “the plant” or at Lear. But, I always thought that it would have been more devastating to lose all the small businesses. Janesville survived and they’re coming back! I think Janesville’s going to be okay without General Motors.

Do you plan to remain in the Rock County area?

Oh yeah, we have a plan that we would like to see come to fruition. So, we’ll see what happens. We never know what lies ahead in the future, so we just take it one day at a time, and that’s all we can do.