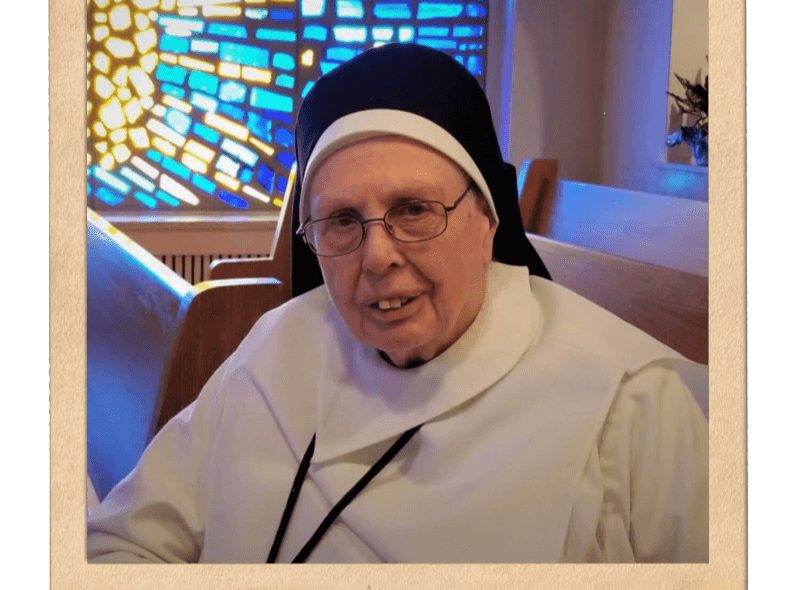 Sister Mary Denise is the former Director of Nursing and Administrator at St. Elizabeth Nursing Home, and a seamstress for Stuffed Animals and Baby Item Fundraisers.

I’m from Fredericktown, Missouri, which is near the Mark Twain National Forest. I was raised out in the country. There were six children in the family and I’m second from the end.

When I was young, I helped to feed the chickens and help with the housework. As a child I enjoyed climbing trees and playing with the neighborhood kids, playing house or playing trucks and cars with my brother.

Tell me a bit about the family.

One of my sisters played guitar and my dad was a violin player, first violinist for the Cape Girardeau Symphony Orchestra. My Dad would often practice violin until midnight. My father and sister used to play concerts for people in town. He died in 1989. To this day, I really like classical music.

I took music when I was young, then quit for a while, then took music again in high school. But I was too nervous to perform. Once I was supposed to play a benediction on the organ, but I got up there and couldn’t hit one note! So, I gave it up. But I do love to sing the hymns.

I still have family down in Missouri, but it’s a bit far for them to come visit. They were up here for my Golden Jubilee in 2010. 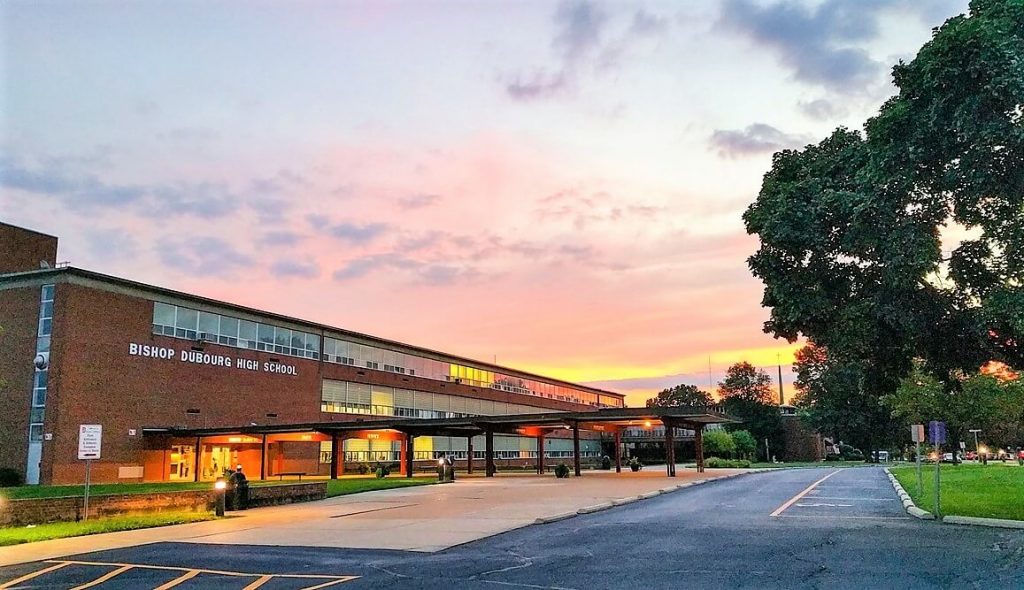 Where did you go to school?

I attended a one room schoolhouse from 1st through 5th grade. From 6th – 8th I went to St. Michael’s Catholic High School in town. I attended Fredericktown High School for the next three years.

My mother died when I was a junior in high school, so I went to live in St. Louis with my sister, who was married with a couple of children. There, I attended my last year of high school at Bishop DuBourg High School. I helped my sister take care of the children and read stories to them.

What inspired you to become a nun?

During high school, I knew I wanted to become a sister. When I was 11 years old, it was the influence of the teachers, the sisters at the school, going to mass everyday that helped me to know that’s what I wanted in life.

What happened after high school?

I worked as a nurse’s aide in hospitals. Then, in 1959, I entered the convent in Watertown, WI. After six years, you take your final vows. When I was first professed, I went to nurses’ training in Madison at The School of Nursing run by the St. Mary’s sisters. In 1965 I graduated.

I worked as a nurse in Watertown until 1966 when I was transferred to Janesville. Here I became the Director of Nursing at St. Elizabeth Nursing Home. At that time, I was at the old house on the corner of Atwood and St. Lawrence. We had 23 patients. Today there are 45! 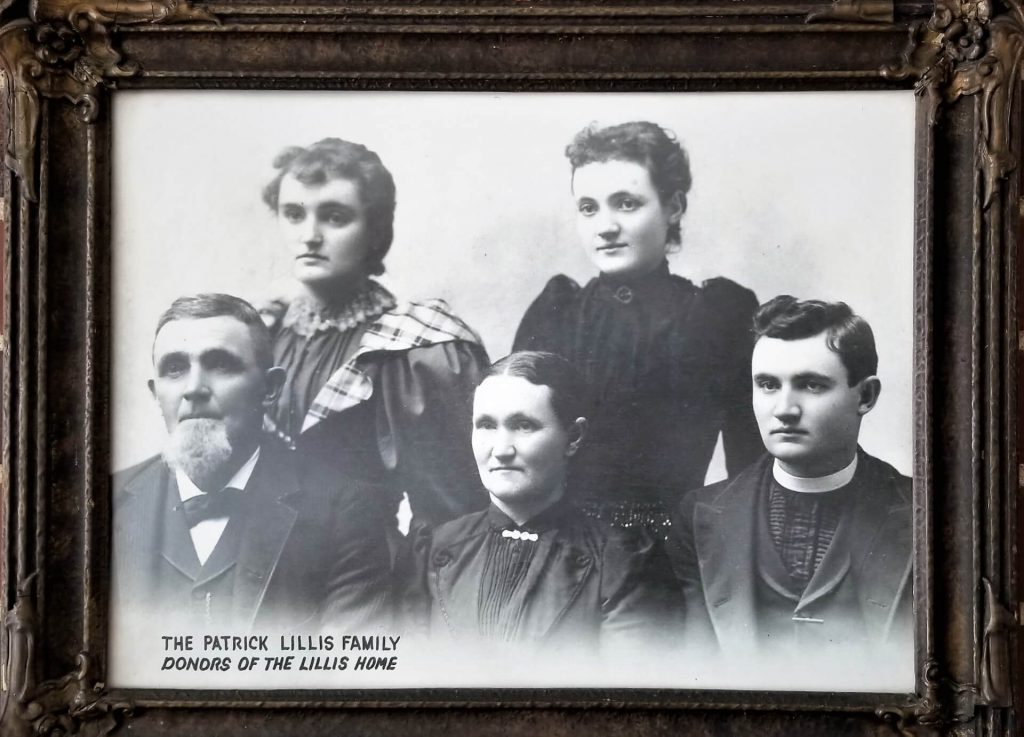 Located on the corner of Atwood and St. Lawrence in Janesville’s historic Courthouse district, the house was originally built by Malcolm G. Jeffris in 1906.

Ownership of the house was passed on to his daughter, Helen Jeffris Wood, who in turn transferred the title of the property to the Roman Catholic Diocese of Madison Wisconsin in 1955.

Elizabeth Lillis was a teacher and one of two daughters in the Lillis family of Janesville. She passed away on June 10, 1949. Under the terms of her will she left the remainder of her estate to the Roman Catholic Diocese of Madison to establish a Catholic Home for the aged.

It was from these funds that the diocese was able to purchase the home at 502 St Lawrence Ave. In 1956, the Diocese opened the house to older women who could not live on their own.

At that time, the home and its residents were taken care of by the Sisters of Charity of Saint Vincent De Paul from Zams, Austria. As the resident population grew, a skilled nursing facility was built around the original home.

St. Elizabeth Home, “The Lillis Home,” was officially opened on April 15, 1967. Today, the original house is used as a convent for the Sisters of Charity of Our Lady Mother of the Church who, as of 1974, own the nursing home.

How did your work responsibilities change over the years?

In 1972, the state decided to license all administrators. So, I took the test and got my Administrator License. I was still the Director of Nursing and Mother was the Administrator, but I would help her with things, state related especially.

In 1977 Sister Jazinta became the Director of Nursing. She and I worked wonderfully together for many years. I was in my 70’s when I retired, though I felt like I could work longer.

St. Elizabeth Original Home and the Addition of the Nursing Care Facility

What are some of the changes you’ve seen over the years here at St. Elizabeth?

Workwise, more rules were being added from the state level, especially in healthcare changes for the patients. This made the work a bit more challenging.

The newer addition to the building came in 1967. As state requirements came in, we needed offices, so in 1984, we added on the new office spaces on the east end.

Tell me about the Chapel.

In 1999, we remodeled the chapel. A wall was knocked out so that it faces a different direction and there is more room in the chapel. With the growth in the number of residents, it has been expanded twice over the years. 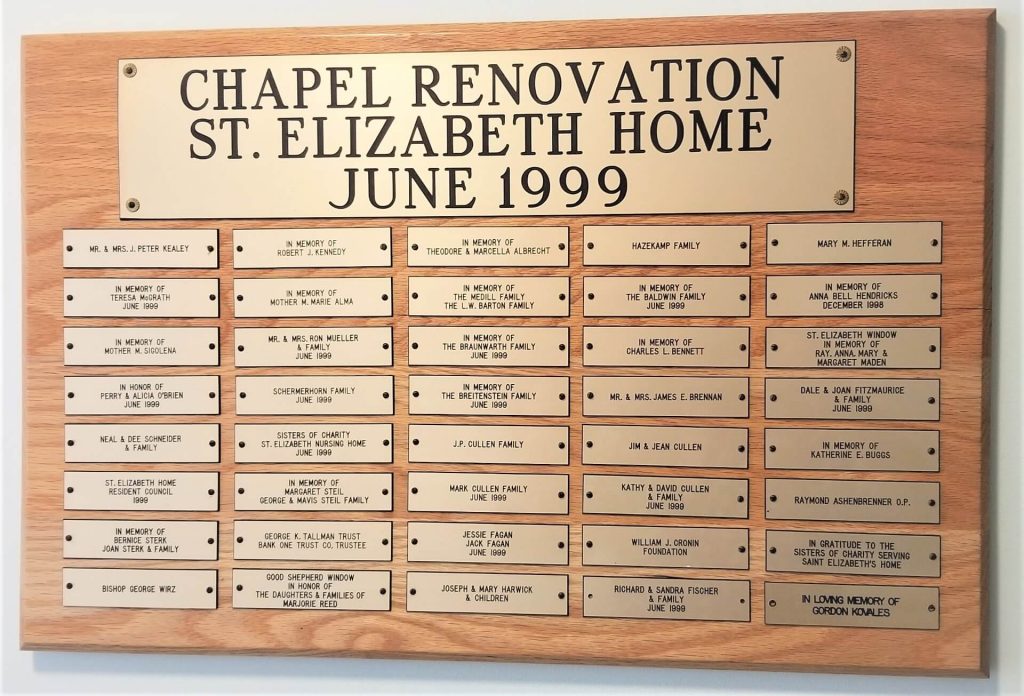 Community Support for the Chapel Renovation

We attend mass here when we have it on Saturday and Sunday, otherwise we go to St. John Vianney. We enjoy attending the SJV events and such. One of the St. John Vianney parishioners used to take us out riding on his boat on the lake!

How many employees work at St. Elizabeth?

There are between 70 and 80 nursing staff and kitchen workers. 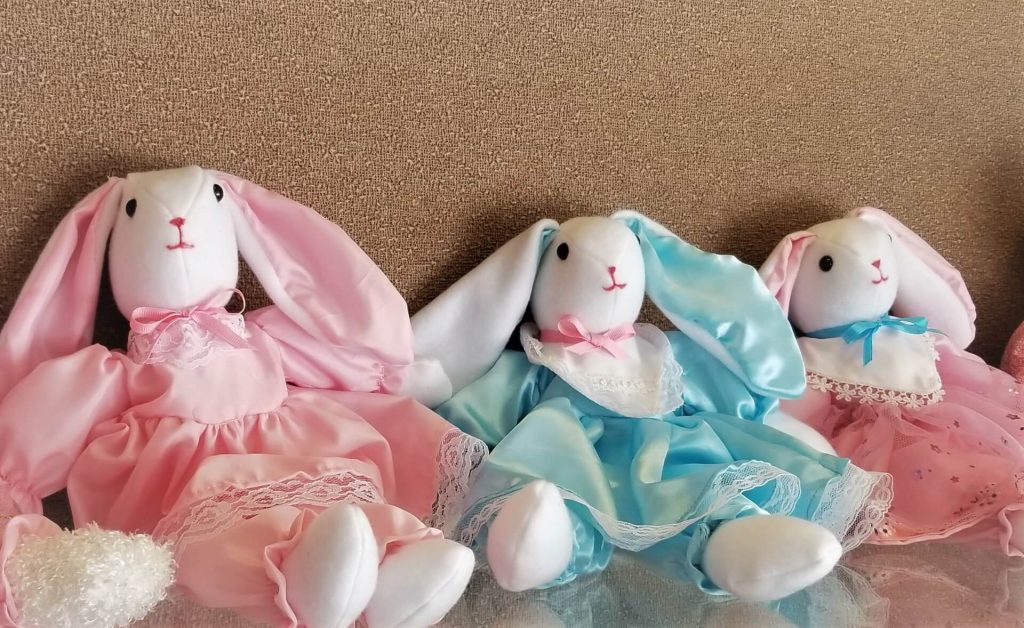 How did your sewing fundraiser project get started?

My mother had taught me to sew when I was 9 years old. I continued to sew all my life. Around the time I retired I started sewing even more.

Years ago, when I was working in nursing, I used to have helpers. One lady would cut out patterns, another lady would stuff them once they were sewn, and another would sew on buttons, tails and legs. I would design the animals, snowmen and things. These friends would do the extra work. 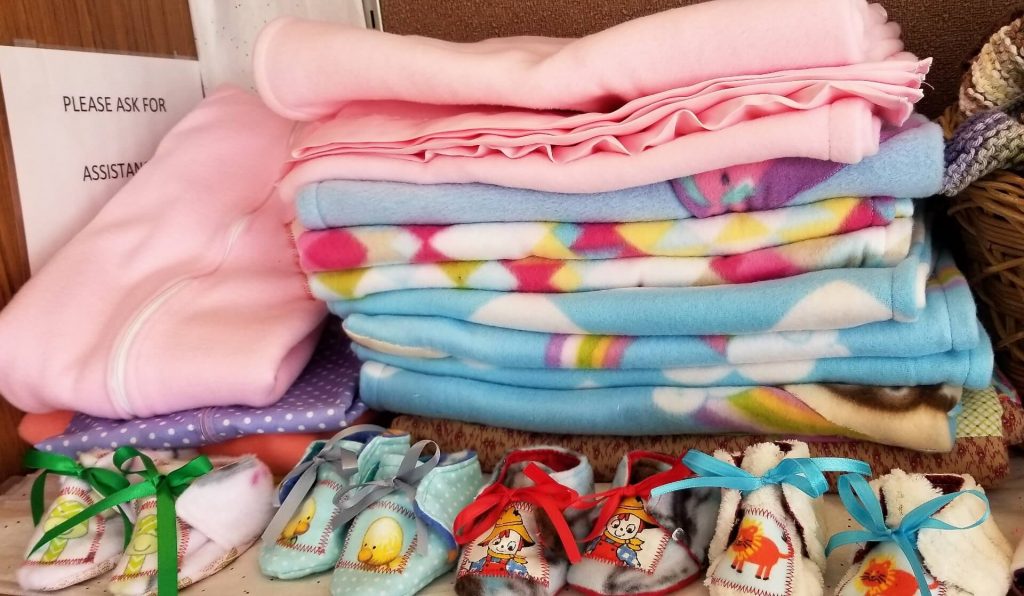 I also sew baby blankets, baby shoes, sleepers and bibs. I have a sewing machine that makes a zigzag pattern. There’s a lady who sends me nice fabric, a big box of fleece periodically. 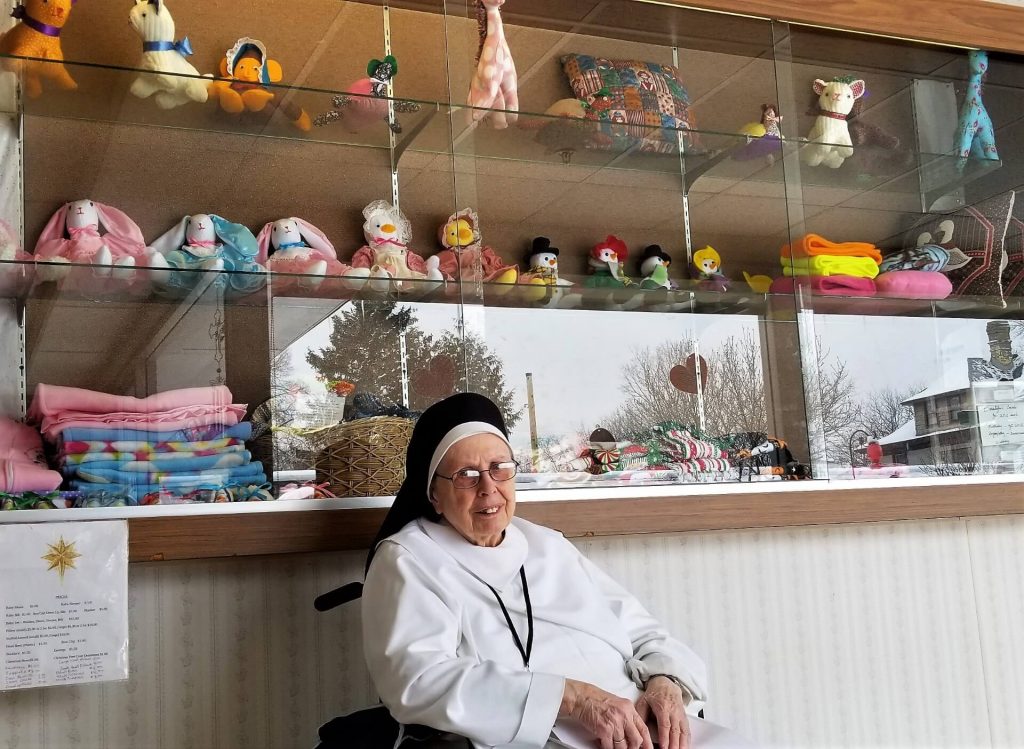 Sister Mary Denise at the Display Case at St. Elizabeth

How do you sell these special items?

Currently, we have a display case where we sell them to raise money for St. Elizabeth. On their birthday, each of the employees at St. Elizabeth can choose an animal or baby item from the display case as a gift.

I used to put together a baby basket of things I had made and I would sell it at silent auctions to raise money.

Are there other types of fundraising events for St. Elizabeth?

Every now and then we have a different type of fundraiser. When Sister Christopher was here, we used to go out and sell candy bars to raise money for a new stove.

The latest fundraising project is an art display in our front halls with framed art by local artists. A percentage of the proceeds from the sales goes to St. Elizabeth. The first featured local artist is Connie Glowacki. The public is invited to view and purchase the artwork. 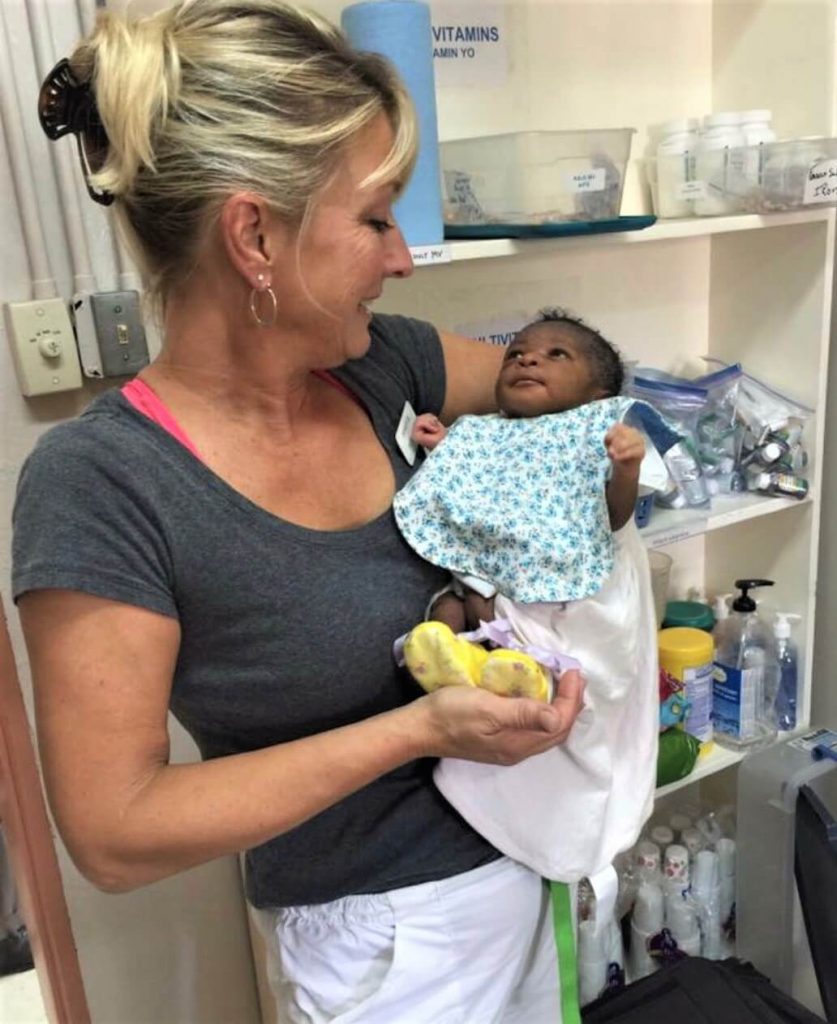 Tell me about your sewing project for Haiti.

Jill Henderson, a local nurse who travels to Haiti to work with impoverished communities there. She used to work here at St. Elizabeth for a while. On her trips to Haiti she takes a lot of things down to the poor. I was sewing and had started giving her things and continue to do so.

How many trips have you made to Haiti?

I’ve traveled to Cite’ Soleil, Haiti 15 times over the past nine years, starting with the Cholera epidemic. For the past few years I’ve traveled independently to focus on a young man, the son of my late friend.

Sister has provided hundreds of little dresses, swaddling blankets and booties to little ones in the community of Cite’ Soleil over the past five years. When she first learned of my work in Haiti, she cleaned out her sewing showcase and began working on new projects.

Tell me about Cite’ Soleil, Haiti.

Cite’ Soleil is considered to be the most impoverished and dangerous area of the Western Hemisphere. Many refuse to travel there. Reaching the little ones in this community will be my goal and Sister Mary Denise’s for years to come.

Where does your nursing work take you today?

In 2015, I started Full Circle Care Services to assist St Elizabeth and homebound clients who need assistance with activities of Daily Living. This has also provided me with the flexibility to travel when urgent needs arise.

Sister Denise, what are some of the things you enjoy sewing for the children of Haiti?

For the children in Haiti, I sew size 2 and size 4 dresses. I have a large bag ready to go now. Jill will come pick them up and take them whenever she’s ready to travel. There’s joy and happiness in helping others.

How many dresses do you think you have sewn for the girls of Haiti over the years?

Well, I continually sew every day … probably dozens of dresses. Every day I sew, pray and iron the chapel wash.

How long do you think you’ll be sewing?

I’m 82 years old now, but I will sew as long as I am able! Whenever the Good Lord wants me, I guess he’ll take me.

“There’s joy and happiness in helping others.” ~ Sister Mary Denise