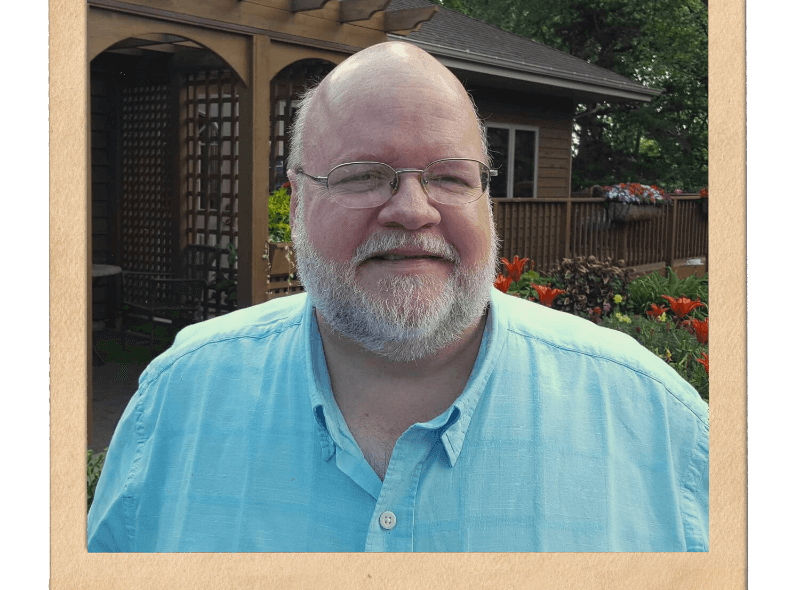 Paul Tropp of Janesville is manager of the Edgerton Performing Arts Center and a professional piano tuner.

Tell me what it was like for you growing up in Rock County:

I was born in Janesville. My family was a large family, we had 8 kids, I’m in the middle, and Mom always said I let the kids speak for me. I didn’t learn to speak until I was about 3! I enjoyed riding bikes, and we used to go sledding down the hill behind the hospital right along the river behind Mt. Calvary Lutheran Church. We used to name the hills, like Grandpa Hill and such. That was near the Tallman House.

I was born in the Fourth Ward in my grandfather’s old house on Chestnut Street. I went to Washington Elementary until 3rd grade, and then ended up at Wilson Elementary School. Wilson was enjoyable. Being the new kid in the school, I was given the job of putting the U.S. flag out. One of our neighborhood kids had been doing it, and he kind of took me under his wing and showed me how to do it.

Then I attended Edison for middle school and went to Craig for high school. We moved when I was going to Edison and my brothers were at Craig, all involved in Spotlighters and music. At that time, Parker was more of the classical school for music. They had the madrigals and such, whereas Craig had the Spotlighters.

My parents were able to arrange it so I could go to Craig with my brothers. In doing that, I was in Spotlighters for all the years and the musicals. Our twin siblings, Jeanne and Jim, went to Parker, so we were kind of split. A lot of my friends from Edison had also gone to Parker.

My dad brought home a piano on a boat trailer. They had bought it for like $100 out on a farm. My mom had been working at Cedar Crest at the time and heard about it. It was a mahogany upright. And right away I hooked onto it. So, my sister and I started lessons. I had piano lessons at Johnson Music, which was located on the northwest corner of Rockport and Center, across from what was Geri’s Hamburger’s.

And I still have that piano!

What did you do after high school?

Mr. Wroblewski didn’t actually play piano, but he knew pitch. He eventually learned to play from one of his students, and sang in the churches and such. He lost his sight during childhood in a baseball accident. He earned the nickname Charlie the Tuner and was such a wonderful teacher and man. So, I studied tuning and restoration work and got into the business.

Tell me about your work in Rock County:

In 1975, while in middle school, I started working on the Tallman House Restoration Project. I continued working there and still had a part time job even while going to school. I was tuning pianos, as well. I worked at the Rock County Historical Society for 10 years, through 1985.

At first, I helped Ruth Hughes, the curator, and she was responsible for maintaining the home, all the collections, cleaning the rooms, etc. She was a great teacher. All my love for woods and antiques are because of her.

I started out helping Ruth with the cleaning and maintaining the furniture, we would clean the linens and I learned how to take care of things, to preserve things architecturally and such. Then, I went into training to become a docent, so I gave tours through the 70’s and 80’s. I was Gift Shop Manager, Volunteer Coordinator.

My last position was Historic Site Administrator, where I was responsible for the day to day functions of the restorations and also the Frances Willard Schoolhouse. I would get the volunteers; we did tours and helped with training. Mr. Montgomery was mostly responsible for the research and developing the touring story.

We would have a Docent Tea in the house where we would honor the docents and discuss plans. It was a sweet time, I really enjoyed that. Once and a while I am still called to tune the piano up there. I restrung it a few years ago. Unfortunately, we couldn’t do anything with the original Tallman piano. But, the Bower City Band piano has been restrung.

After ‘retiring’ from the Historical Society, I did piano tuning and repairs and got heavily into that. Independently, I worked with music stores like Forbes Meagher and Farley’s House of Pianos. I had gone out to San Francisco to be factory trained in installation of Piano Disc, which is an intelligent computerized digital system that goes into virtually any piano. I did that for many years. It was fun.

I don’t do as much with Piano Disc anymore. The piano industry struggled after the economic recession, so that sent it downward.

Tell me about your work as Manager of the Edgerton Performing Arts Center:

That job came about while I was tuning pianos for the Edgerton School District. I was tuning a piano in the Edgerton Middle School, and as I was driving away, I saw the workers building the Performing Arts Center. I found one of the custodians outside, and I knew him from working on pianos in the schools.

He told me that they were looking for a custodian and wondered if I’d be interested in the position. So, I applied for the position and didn’t get hired at that time, but this was a blessing in disguise, because I had just agreed to do a Piano Disc installation for Forbes Meagher, and that was so time-consuming. It would have been impossible to have a full time job on top of that.

So, they hired this other individual, who didn’t work out and she ended up leaving. The Edgerton Superintendent called me and asked me if I was available. And the timing was perfect. So, I was part-time at the performing arts center and part-time at the high school. It didn’t take them long to figure out that there was more to running the arts center than just the cleaning.

In 2000, I took over as Manager of the Edgerton Performing Arts Center for the Edgerton School District. I really enjoy and love it!

In 2004 William and Joyce Wartmann donated $100,000 to be used by the Edgerton School District for community concerts. Since then, the Wartmann Endowment has grown. We do 4-5 concerts a year for the community. My responsibility is to help the Wartmann board to find those artists, negotiate contracts, and take care of them when they come here and such.

What are the changes you’ve seen over the years in the arts in Rock County?

When General Motors left Janesville, we noticed a decline in attendance; people didn’t have the income to go to performances as much. It is also so expensive to do, and the grants aren’t there as they had been, there’s less state support.

We’ve been fortunate to have the Wartmann Endowment in Edgerton to help us. Ticket sales take care of maybe 35-38% of production, then the endowment takes care of some, and we fundraise for the remainder. Of course, there are some very generous people who have a passion for the arts. Without them, we’d never be able to do it!

We’re still trying to recover and are trying to bring it all back. Ronnie Milsap will be performing at EPAC on Saturday, Oct. 21 of this year. When he was here at the Rock County Fair years ago and I tuned his piano.

You have quite an ‘arts’ family and now your son is a performing arts center director. Tell me about that:

Yes, my son, Josiah Tropp, went to UW Whitewater for a degree in Theatre Management and Promotions. He was in charge of some of their programming up at Whitewater’s Young Auditorium. He is now the Executive Director at McComb Bruchs Performing Arts Center in Wautoma, Wisconsin.

He had worked with me at EPAC and it’s funny, because in all the years doing these performances, I relied upon him when I’d go to conferences and needed a soundboard. I’d ask his opinion on the different artists. He has such a diverse interest in music and would have a good feel for what the audiences would like.

We would talk about what people would be interested in, and he gave me a different perspective. And sometimes he comes to me for advice; we’ve kind of used each other that way. He has been coming to the conference for some time, but now he comes on his own. He makes me very proud.

What is it about Rock County that makes you want to stay?

It’s home. My wife, Karen, is from the Beaver Dam area, but she feels at home here and works at Jackson Elementary. But even in winter, it’s still home. Even if we retired, I can’t imagine that we’d be snowbirds. We plan to stay. It really is home to us.