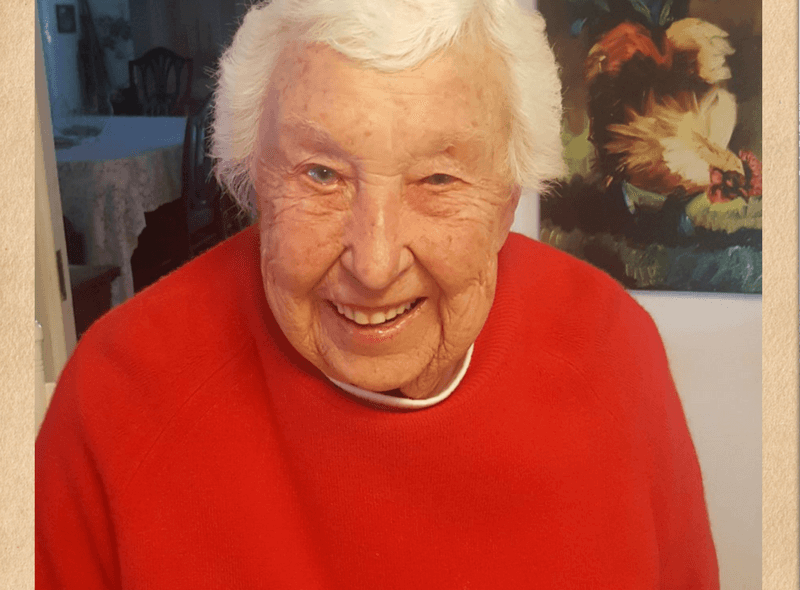 Memories of life in Rock County

My family came out of the potato famine from Scotland and Northern Ireland. Born on this farm, I grew up here. I had to milk the cows. At that time, of course, we had no phone, no electricity, so used candlelight and wood stoves. Our water was from the windmill, and then we heated it on the wood stove. Our day was ruled by the sun. We had the first purebred Holstein cow in the county, sheep, pigs and horses. They did the field work, with old fashioned plows, since there were no tractors.

Winters were harsh. The bread man would deliver, 10 cents a loaf. He came out a couple times a week. We made everything from scratch, there were no mixes. We had fresh meat and produce from the farm. We used ice that was cut from the Rock River in winter and they would deliver a block and we had an ice box in the house. That was how we kept our food fresh.

We knit mittens out of necessity. We had feather mattresses and we jumped into bed at night just to get warm fast. The quilts were warm. They’d sheer the sheep and stuff quilts with the wool.

You’d go out to the privy, a homemade outhouse. You wouldn’t spend a lot of time out there in the winter! There were working guys that built privies and would bring them out. Finally, they delivered to us and they had newer (modern) seats and all.

We only had radio for entertainment. We always listened to the news, and kept up with the war via the radio. We always had to read the paper. My mother made us read it every day so we would become “worldly.”

We had all these cows and had to get the milk to Janesville, we had to have the horses carry the cans in milk wagons down to Delavan Drive and the trucks would meet us there. Snow always covered the roads and we had to wait a long time for removal. The horses were big; Clydesdales and we’d hook 7 horses up and one driver with the reins. Sometimes the horses would run away in the morning and we had to go chase after them on foot.

We got our tractors when I was in my early teens and I learned how to drive them, but I had to tend the horses. We did a lot of hard work. We had chickens, and eggs that went to the hatchery. If the eggs were fertile, you got a premium. We’d get new shoes from the chicken/egg money. Milk/animal money always went back into the farm.

I remember when Seneca came; they grew sweet corn and peas. They’d bring Jamaicans up to pick sweet corn; this was in the 1940’s. Everyone was at the war. The workers sang Jamaican songs.

When we got a phone, it was a party line, 8-10 people, neighbors shared a line and we could hear everyone’s conversation. If strangers wandered down the road, they’d pick up the phone to let each other know. They’d often give them a chicken or two so they’d go away.

We’d go into the city for groceries on Friday night and to church at Cargill, where the Y is now. We would take the milk truck down to church. If we rode in the back, we got all windblown on our way to church. It was embarrassing because they’d say, “Here come the farmers in the milk truck!”

I went to a one room schoolhouse on the corner of County J and County O. It’s no longer there. The students were in grades 1st – 8th. We had to haul water from the farm next door to the school. We had a pail with a stick through the handle and we would go in pairs to help carry the water. The teacher had to tend the fire. Winter was difficult.

We were milking cows in 1941 on December 7th and heard on the radio that Pearl Harbor was attacked. My dad had 4 brothers on area farms who were drafted. He had to help take care of their farms while they were gone. The troop trains would come down from MN, pick up troops in Janesville, and the school would be alerted that the troop train was coming. We’d run out of the school to wave at the troops and the soldiers would wave back and yell “Pray for us!” to the kids. I remember that vividly, and then they were off to WWII. There was a real sense of community back then.

4-H was a big part of our life. We had 4-H plays, meetings and always the fair since the 30’s. It was a part of rural life, and still is, although it’s not as active as now because they get involved in school activities. We used to have a Track & Field Day where we’d compete in all sorts of sports. I played softball.

After 8th grade I went to Janesville High School (now the home of JPAC) and graduated. I guess if it had been today’s time, I would have farmed and raised cows, but back then women didn’t farm, they weren’t encouraged to farm. Women were not in agriculture. I didn’t want to be a teacher and had no secretarial skills, so I went into nursing. Times have certainly changed; the Ag Business School is now full of women students!

I studied at Rockford at Swedish American and then to John Hopkins in Baltimore. I miss being able to go places that were close. It was hard to work in the ghetto; we stepped over drug addicted people in the alleys. But it opened my eyes to the world. We’d get the sailors & seamen off the merchant ships, those who needed care.

I went around the country setting up intensive care units. Then I went to Mayo Clinic, it was like the Cadillac of clinics. So we went to Ann Arbor (looking for a man) and then I met Herm, who was a senior medical student. He kept playing with the instruments, and I told him to “cut it out”

I married Herm out there and we were in Grand Rapids during his residency. We went into the service in Indiana. Herm flew back and forth to Germany & Spain as a flight surgeon. I took David; he was just 4 or so. The bombers came and went. We were in a very secure, small base. He served for 4 years.

Then there was an opening here in Janesville, and we came back because of my farm interests. We lived in town and I had two more kids. I set up the Intensive Care Units at Mercy, Ft. Atkinson, Edgerton, Monroe and I still had the boys at home, so couldn’t travel too far. I taught the classes at Blackhawk Tech, setting up the nurses program.

There was a part-time opening at GM, so I applied and got the job, and then I was offered a full time opening. I worked 2nd shift and I liked that so I could do work on the farm and get things ready for the kids’ supper and all before I went to work.

I’ve had a good life. I’ve enjoyed it. There aren’t a lot of us left on the farm.