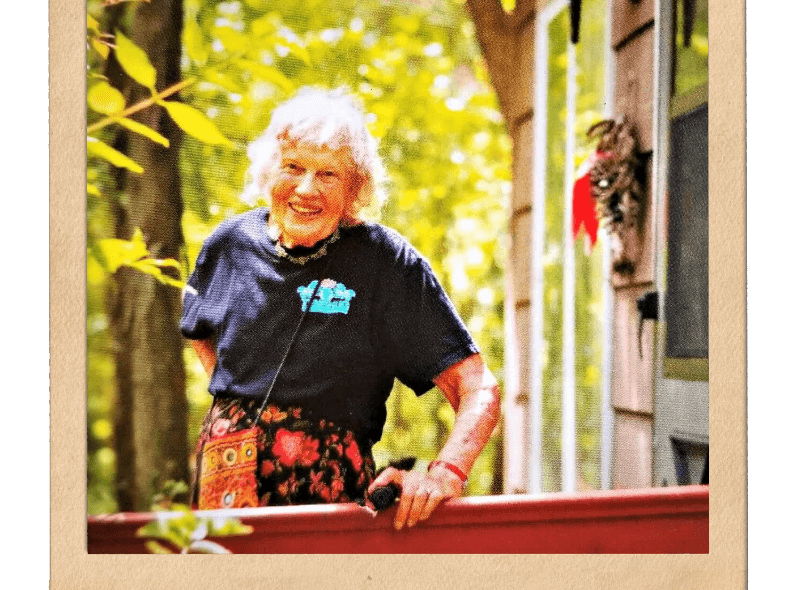 Above photo by Brian Milo. See the end of this post for a photo gallery of some of Nancy Belle Douglas’s artwork.

Nancy Belle Douglas is a former Professor of Art History at Milton College, and former President of the Janesville Art League.

I was born in Evanston, Illinois. At the time my parents were living in Highland Park. Around age 3 or 4 we moved to Whitewater, Wisconsin, into the old, historic Starin House.

My parents had taken over a farm, Turtle Valley Farms, that had belonged to my maternal grandfather. He had founded a refrigerated car company, North American Car, during the Depression. We used to watch the railroad freight cars to see if we could see NACX on the cars as they’d go by.

We moved from Whitewater to Delevan. In about 1937, we managed to build on the land of the farm, so I ended up going to country school. From there I went to Delevan High School on the bus. I graduated from Delevan in 1945.

What were some of your activities in high school?

Well, I naturally loved art! We had wonderful teachers there. We were learning history that was pertinent to WWII, history about China and Germany.

I wanted to go to college. Turtle Valley Farms had done very well. Sometimes things at were very rough during the Depression, you just didn’t know. At that point, I was 17, too young, but I attended Vassar College and went through the accelerated program, graduating early with a degree in Art History.

I had two sisters. The middle sister Emily was more interested in science and got her degree from UW Wisconsin, and my youngest sister, Penelope, or Penny as they called her, also went to UW Wisconsin to study Home Economics. On both sides of the family, there was a belief in education.

What did you do after college?

I was so young, and my parents were so wonderful. They put their money together and for a graduation gift, another gal and I went on a trip to Europe! It was 1948, which was amazing, because we were completely on our own to do things and such a historic time to be there. We went to the Louvre, which was fantastic!

In England, when the war had just ended, they still had price controls, so it was about a dollar a meal. And very plain food! There were still bomb craters all around St. Paul’s Cathedral. It’s something I’ll never forget.

Back home, one summer in the early 50’s, my younger sister and I flew our dad’s plane out west to the foot of the Rockies. She had a pilot’s license, I didn’t. We originally wanted to fly to Alaska, but our father wouldn’t let us. Before we took off, he told us we could always land in a corn field. Sometimes we stayed at people’s farms or with the people who ran the airport.

I believe we landed in Denver, and my dad’s father gave us a treat to stay at the Broadmoor Hotel out in Colorado Springs. Then we took a bus and did some sightseeing at Pike’s Peak and such before we came back home.

Where did you end up working?

At first, because I was still so young, they asked if I might stay on at the Art Department at Vassar. I helped do review sessions with students among other things. I was so embarrassed by my French accent! But, didn’t get any pronunciation in my French class, so we kind of faked it.

After that, I thought it would be good to return to our part of the country. I enrolled in the University of Minnesota for my master’s degree in both Art and Art History. I worked as a teacher’s assistant and had tuition paid from that.

I ended up going out east again and ended up at Wildenstein Gallery in New York doing research there. At the time I was dating my future husband. 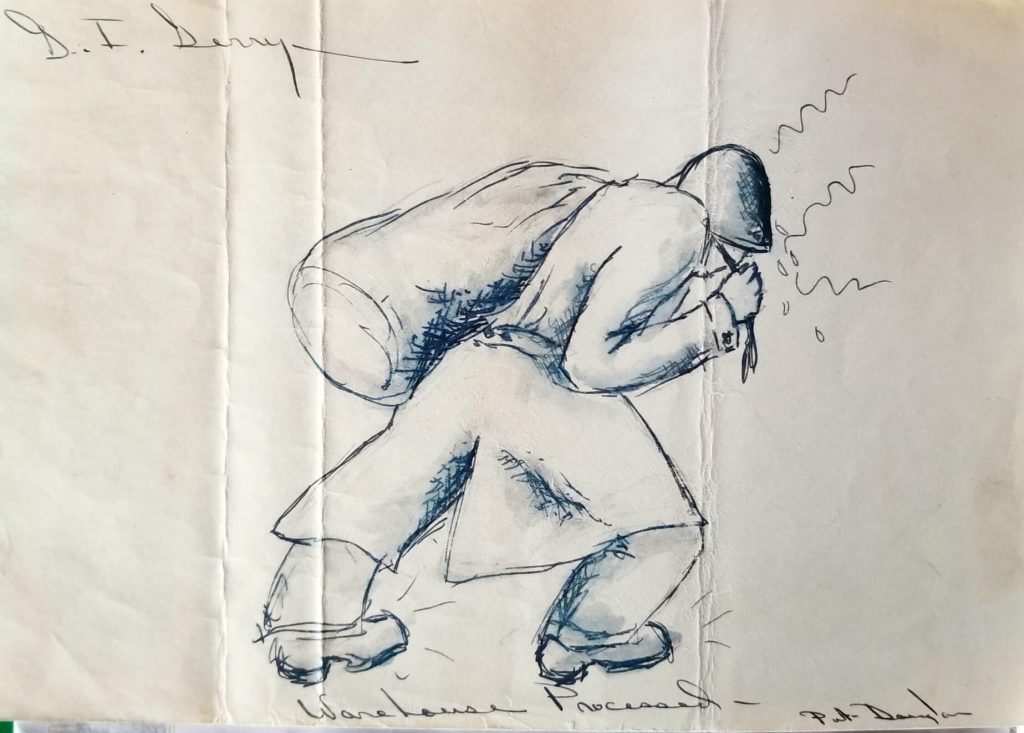 How did you meet your husband?

When I went out to New York to work at Wildenstein, he started to date someone else, so I came back! And we got married in 1956 in Delevan at Christ Episcopalian Church. The reception was at our house at Turtle Valley Farms. 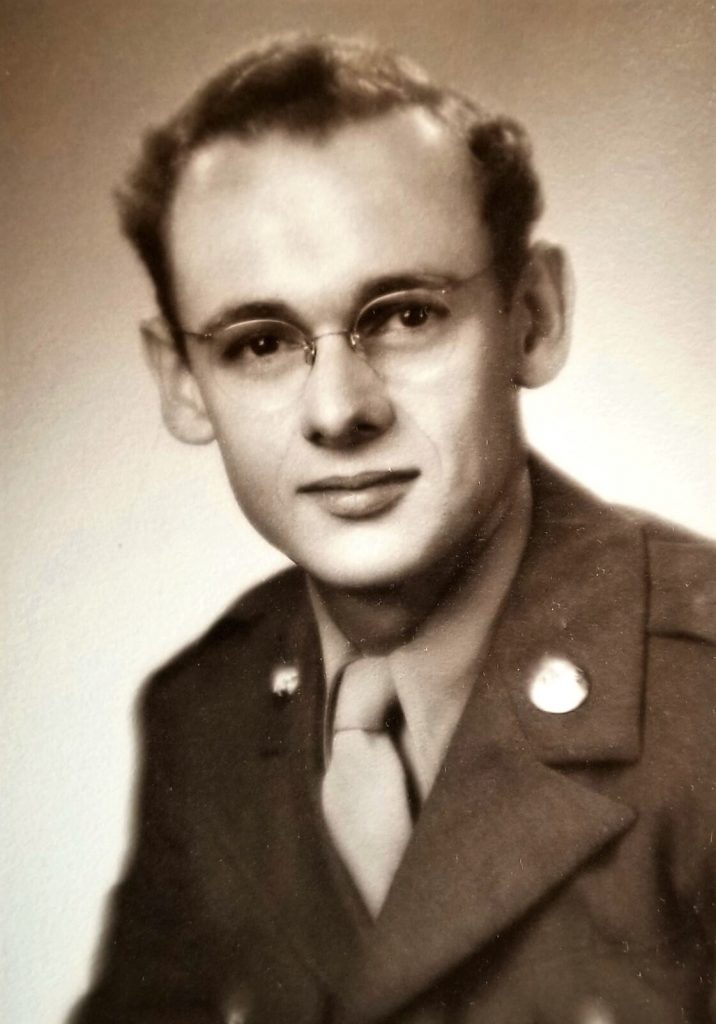 Dick Douglas in the U.S. Army

Dick had served on both fronts in WWII. He had been a good art student in high school, and before he was 18, he took a few courses at Layton Art School in Milwaukee. When he entered the army, he was put in the mop-up detonation squad … very dangerous work!

He was stationed in England and was in the same town in England where Janesville’s Elsie Van Tassell had lived! It’s a very small world! They didn’t know each other then. Later, he was sent to the Pacific theater and to the Philippines. He also worked on plays and theater work in Tokyo for the troops.

Dick’s family owned Douglas Hardware, and Dick wanted to use his skills as an interior designer. He had attended Brown on the G.I. Bill and ended up doing interior design at The Color Center for both homes and businesses in the area.

Did you end up working with him in that field?

I was going to, but I got pregnant, and in those days that changed things for a woman. We had two girls and a boy and I stayed home with them. It was such a privilege!

Were you involved in the community?

During that time, I became involved in the Janesville Art League and was president of that organization for a while back in the 1960’s. I was also involved in the Rock County Historical Society. I was interested in volunteering there because of my background in art history. At the Lincoln-Tallman House, I was a docent, giving tours. Rick Hartung came along and was a serious historian. He got us to give a much more historically accurate tour of the home.

Eventually I went back to work. I knew a couple, Vern and Mary Williams, who were very active. He was with WCLO and knew how to pronounce all the names of the classical musicians, which was more popular back then. Mary was with Milton College in the Art Department. She asked me if I’d like to work and teach art history courses. I said, “Yes, yes! I need something more to do than laundry!”

How long did you teach Art History at Milton College?

At least five years. It was during the late 1960’s and early ‘70’s and a lot of students were just coming back from serving in Vietnam and starting college.

How did you end up working for RCHS with the National Registry of Historic Places?

In the mid-70s, after I was done at Milton College, Rick Hartung, Director of RCHS came to me about a grant they’d received to go around the county and find places. I did wear out a car because it was one of those cheaper cars, with all the manual controls, starting and stopping!

Rick was so kind, though, and when my parents were both dying of cancer, he allowed me to work from home sometimes. I had to work on issues of the estate, Turtle Creek Farms, so retired from working at RCHS.

Was there one historical event that was significant to you?

My parents were always interested in history, so I was too. As a kid in the late 40s, I remember I got interested in Finland because they were fighting back against the Russians and no one else would. I became interested in Finnish music and got interested in the composer Jean Sibelius. So, I wrote to him once when I was 12, and he actually wrote back! The teachers in Delavan had me talk to the class because I had so much knowledge of Finland!

In your travels with your husband, where were your favorite places?

We saw the Taj-Mahal by moonlight! We traveled with an archeological society group from UW traveling to South America, to Peru. We also went to Greece, saw the pyramids in Egypt and went to India a few times! We traveled to Hong Kong and South Korea, too. We never had any idea that we’d someday see the world!

Where is your family now?

Well, all of my children, Sarah, Anne and David started at University of Wisconsin-Rock County, and all finished at UW-Whitewater. At the time, there wasn’t as much opportunity for employment around here, so they’ve moved away. But, they come back and visit. They all are creative in their own ways. Sarah teaches art classes, Anne does fabric arts and David is into photography.

Of my sisters, one lives in Verona, Wisconsin, and the other went back to the mountains! A few years ago, my children gave me the gift of flying out to see her.

You don’t mean literally, do you? 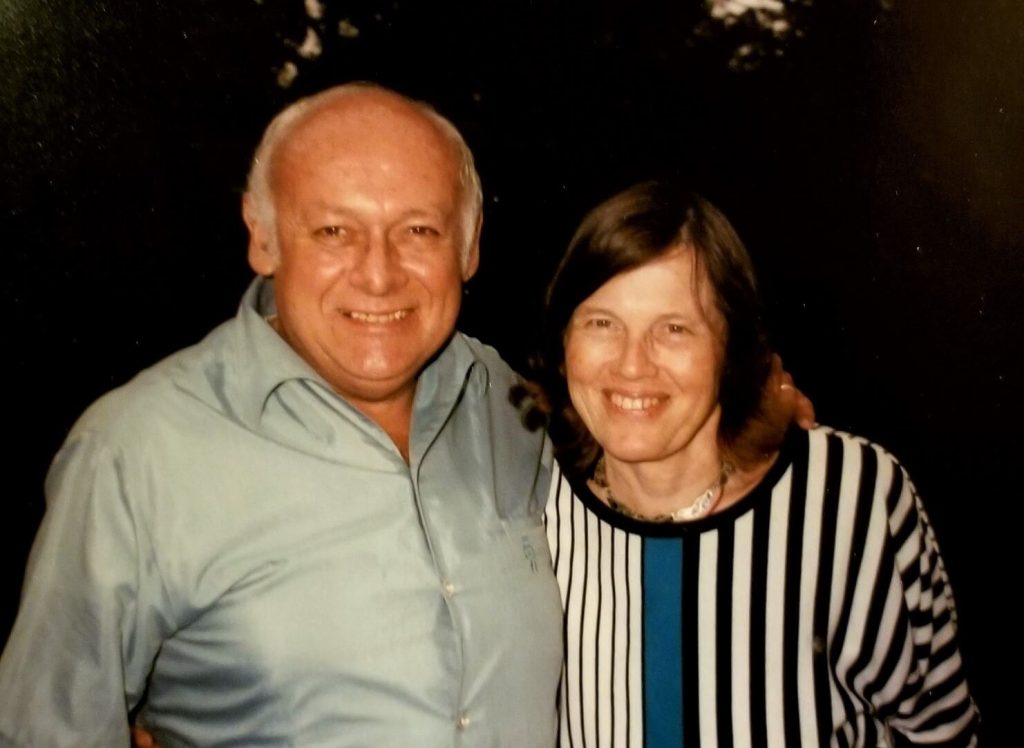 In what community activities were you and your husband involved?

Dick was very involved in community theater. He and Elsie Van Tassell were involved with Janesville Little Theater. She got him into designing and building sets. And I helped paint them.

How has the community changed over the years?

Certainly, in population! It was only 20,000. There was such a population explosion after the war. There have been changes in industry, too. General Motors and Parker Pen were such big companies back then.

What do you love about Rock County?

There is so much to do; fun stuff, cultural things. And of course, the beauty of it! I am sad that here we have some of the best soil in the world, the best is here and maybe in the Ukraine, and yet it is all being cemented over.

But, it’s a beautiful community and I have made a lot of wonderful friends here.