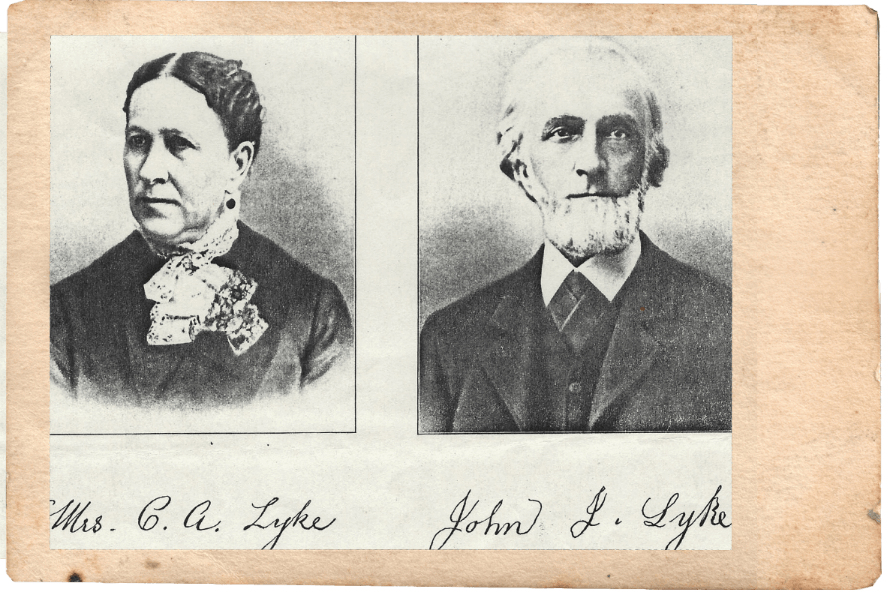 This week’s Focus In story was written and submitted by Jim Lyke of Milton, WI. It details his family’s 160+ year history in Rock County.

I’m grateful for the work of the Rock County Historical Society, since so much of my family’s history takes place here in Rock County. We’ve been proud to call this area our home since the mid-19th Century.

My great-great grandparents John and Catherine Lyke moved here from New York State in 1856, along with my 3rd great-grandmother Nancy Lyke, who had been recently widowed. After arriving in Rock County, they farmed on shares until 1862 when they purchased an 80-acre farm off of what is now Read Road in La Prairie Township. Their farmland is currently part of the property owned by Seneca Foods.

John served two years as a La Prairie town supervisor and was La Prairie school treasurer for 17 years. A 1901 biography of “prominent Rock County citizens” describes John as a “hard-working man” who has “led a career of singular probity, and by industry and honesty … achieved a large success in life. He has treated the world squarely, and it in turn has used him well.”

Although John and Catherine owned their Read Road property into the early 20th century, they retired to a home in the city of Janesville in 1887. Their house on South Main Street was near the site of what is now Hedberg Public Library. Together for nearly six decades, John and Catherine succumbed to old age within a month of each other in 1910.

Their son, my great-grandfather Benjamin Clark Lyke, also farmed here in Rock County, as did my grandfather Robert Burns Lyke.

After my great-grandmother Maggie Austin Lyke died of typhoid fever, Robert Burns Lyke left home at age 15 to see the world. Already full-grown and able to pass for older than his true age, one of the ways Bob made money was by going to carnivals where a challenger could earn cash by lasting a few rounds wrestling or boxing with the sideshow champ. His travels eventually took him to what was then still the Wild West, South Dakota. There, he witnessed a shootout in the street that convinced him to return to Wisconsin and settle down.

Marrying Mary Zanzinger in 1909, Bob farmed in Johnstown and Milton Junction before returning to the family’s roots in La Prairie Township in 1917. They moved to a farm on Belding Road across the road from the one-room Belding School. Both the school and the farmhouse still stand today.

My grandfather’s younger brother Charles, a Janesville resident, enlisted and was sent to Europe in 1918 to serve in World War I. Charlie saw action in several of the biggest battles in France. According to the Janesville Daily Gazette, he “went through the hardest fighting of the war without receiving a scratch.”

Ironically, while serving in Germany in the Army of Occupation after the armistice, Charlie died tragically when he was struck by a train. His name appears as a war casualty on the World War I doughboy monument at the corner of West Milwaukee and North Franklin Street in downtown Janesville. His obituary stated that he was “well known in this city, naturally of a jolly disposition and made many friends wherever he went.”

Besides farming, my grandfather Bob also conducted dances above the Shopiere Store for several years. During Prohibition, alcohol was available at the dances, and Grandpa would tell stories of quickly throwing bottles of illegal booze into Turtle Creek when he was tipped off that the “revenuers” were on their way.

My father, Robert Charles Lyke, was born in the farmhouse on Belding Road on April Fool’s Day, 1924. By the time he was 5, Bob Jr. was a regular fixture at the Belding School, fond of following his teenage sisters Alice and Marian across the road. The teacher finally told my grandparents that since he was at the school all of the time, he might as well become a student. Because of his early start, Bob finished high school just two months past his 17th birthday. 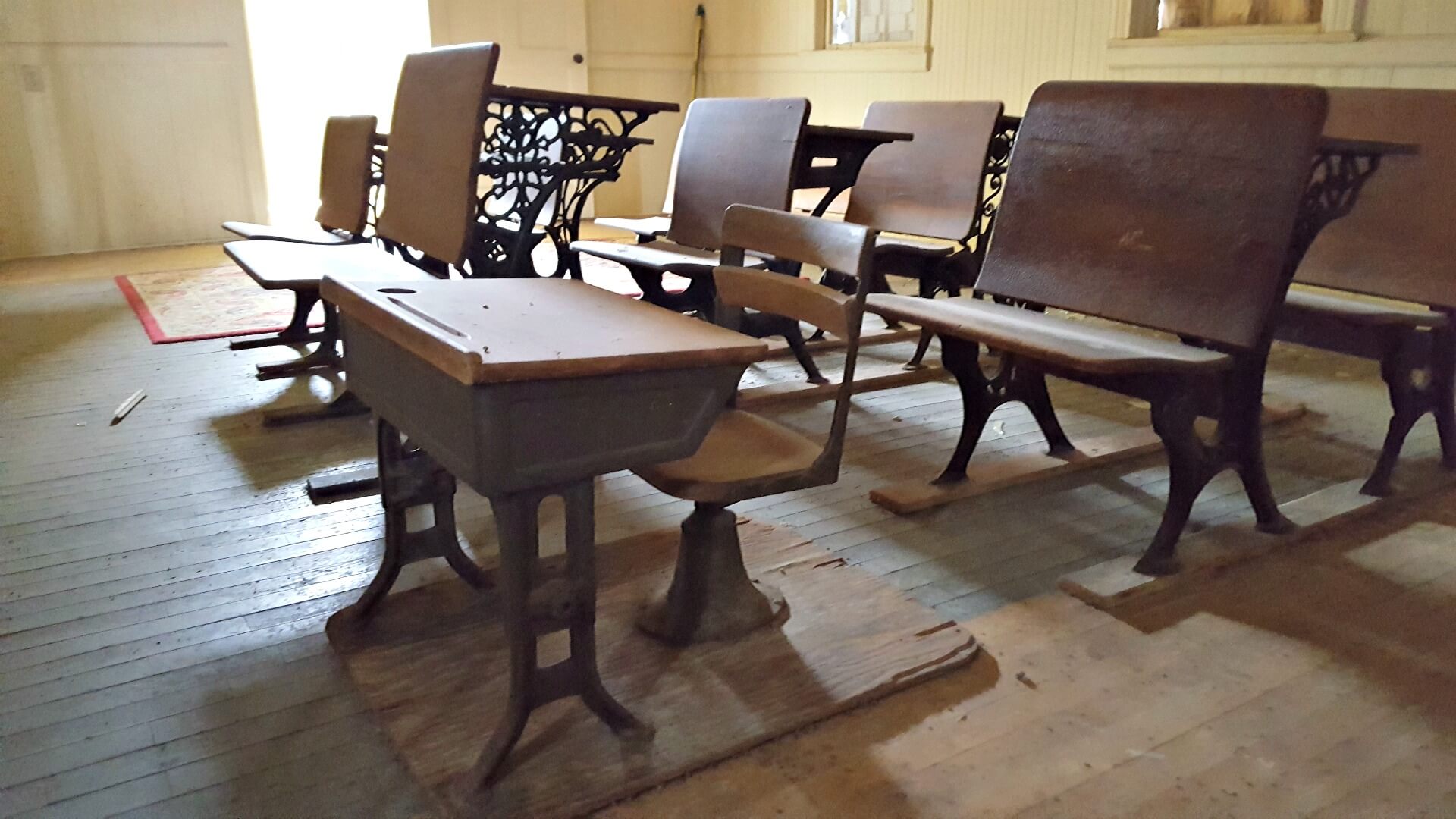 Desks inside the former Belding School

Recently, I was able to explore inside the Belding School. Unfortunately, the building has been neglected and is in very poor condition. It is an empty shell except for some shelves, part of a blackboard and some very old desks. One of the desks was particularly small, and I would like to think that it might have been the one used by my father as a 5-year-old first grade student in 1929.

The Depression hit my grandparents hard. They lost the homestead on Belding Road and ended up farming on shares around the county. One Christmas, money was so scarce that my grandparents could not afford Christmas presents for my young father. My Aunt Alice’s husband Floyd Russell, who was employed at General Motors, found out about the dire financial situation and came to the rescue as my dad’s personal Santa Claus.

Eventually, my grandparents moved to a farm on County M near Indianford. My father Bob Jr. attended Edgerton High School, graduating as the class valedictorian in 1941. Bob Jr.’s best friend in high school was Allan Jacobson, one of seven children raised by his mother Elsie after she was widowed in 1926. Elsie was six months pregnant with her seventh child at the time of the car accident that killed her husband. Her final child, Al’s sister Joan, caught Bob Jr.’s eye when he came to visit Al. A courtship ensued and they were married in Edgerton in 1948.

My Uncle Al enlisted in the US Navy and served in World War II on ships that participated in the invasion of Sicily and the invasion of Normandy and survived the sinking of each ship. After his first ship was sunk, Al was listed by the Navy as missing and my mother and her family feared the worst. My grandmother was so upset that she suffered a nervous breakdown. After nearly a month with no news of his fate, Al surprised everyone when he showed up in Edgerton, officially on leave after surviving the ordeal.

After their marriage, my parents spent a few years continuing to farm with my grandparents on County M before establishing their own home and farm in 1951 at the corner of Highway 51 and Russell Road in Janesville Township. My grandparents retired from farming and moved into a house on Terrace Street in Janesville, with Grandpa taking a job as a janitor at the YMCA in downtown Janesville.

After retiring from that job, Grandpa had to have both of his legs amputated due to severe gangrene. My father built a wheelchair ramp over the back steps of Grandpa’s home on Terrace so that he could continue to live there. Losing his legs did not inhibit his ability to get out and about. Grandpa still had solid upper body strength and became quite adept at entering and exiting our car by sliding himself across a board extended from the car seat to his wheelchair.

Just like Bob’s grandparents many years before, Bob Sr. and Mary passed away within a month of each other in 1968 after nearly 60 years of marriage.

My three siblings and I all graduated from Milton High School and have remained in Rock County. My father sold our dairy herd and retired from farming in 1985 but fell ill from cancer soon after and died that same year. The following year, my mother returned to her Edgerton roots and moved back into town, across the street from one of her sisters and a block away from another. 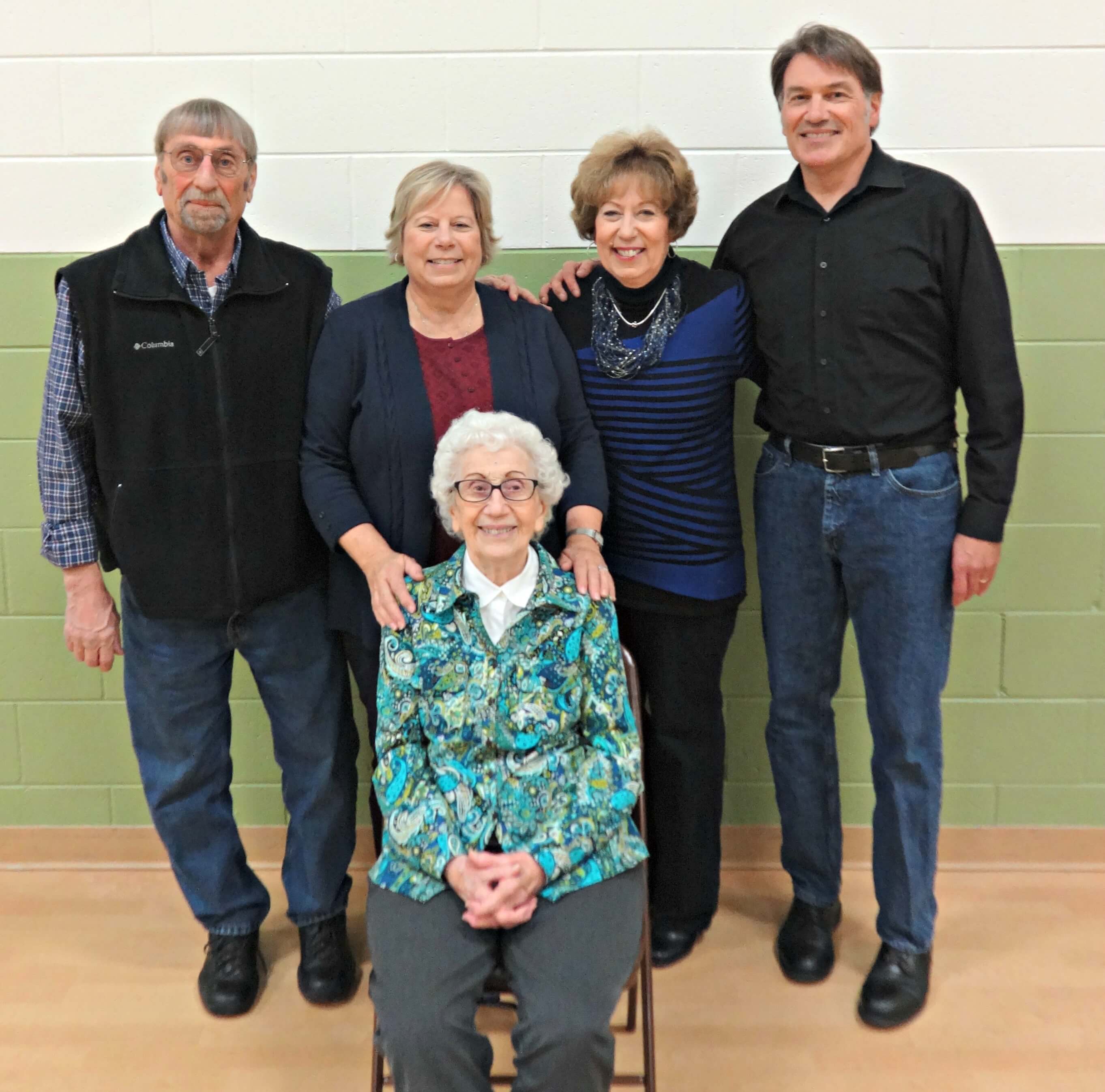 To this day, the Lyke family’s ties to Rock County remain strong, as all three of my siblings, my mother and I live within about 15 minutes of each other. For 162 years, our family has been proud to call Rock County our home.