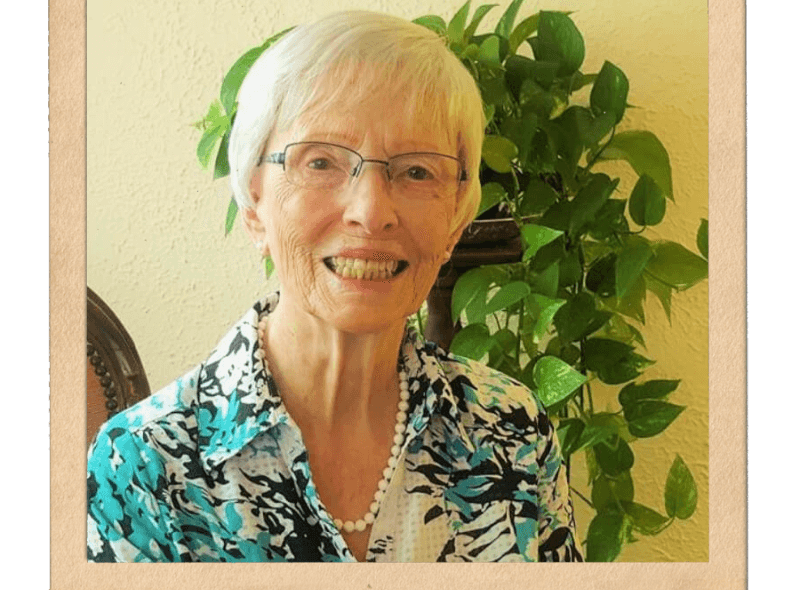 The late Lucille Sunby was a former Physical Therapy Manager, retired from the Business Office of Milton College, and a supporter of the Milton College Preservation Society.

Interviewer’s note: It was a true pleasure to sit with Lucille and her daughter, Carol, in Lucille’s lovely home on a warm July afternoon in 2017 for a video interview. Lucille was so bright, sweetly pleasant, and a woman of quiet strength whose wit and energy made you doubt she could possibly be a centenarian! Her story is rather remarkable, and I wanted to be able to share it once again on our Focus In page. About two months after this interview, Lucille Wells Sunby, age 101, died at Edgerton Hospital on Thursday, Sept. 7, 2017. May her story continue to inspire us all! 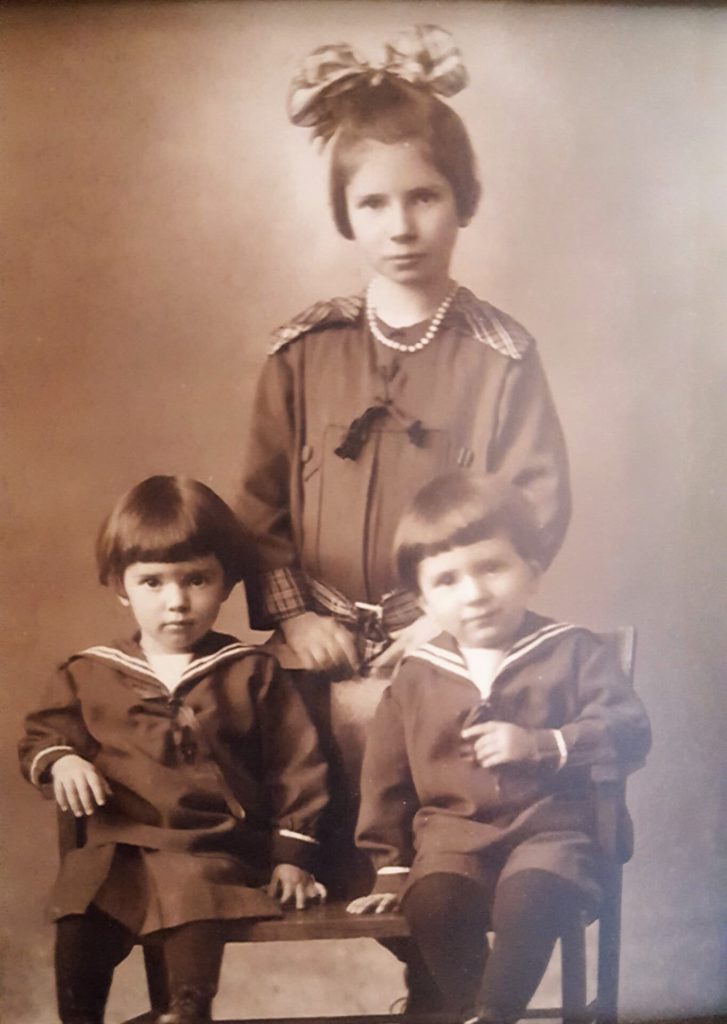 Tell me about your early years.

I was born in Dodge Center, Minnesota on February 11th, 1916. I had a twin brother, Loyal, and an older sister, Roberta. My parents were Kinney Robert and Zalia Wells.

Our father died when my twin brother and I were 5. My sister was ready for high school and we were ready for first grade. My mom and grandma started a boarding house in Dodge Center. We had mostly teachers in our house. My mother and grandmother provided a wonderfully nice home for us, in spite of all the work.

What brought you to Rock County?

What was it like growing up in Milton then?

Milton then was far different than what it is now. It was a much smaller town. I think when we came here, the population was somewhat over a thousand. There were a lot of outdoor games. Everybody joined in!

I guess we knew everyone and where they lived and all about them. You know, it was a happy time for kids. Church activities offered a lot. 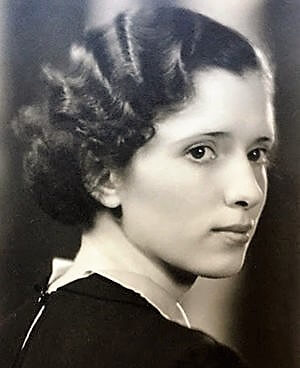 Tell me about your education.

I started in Milton in fifth grade and went through the grade school. I graduated from Milton Union High School in 1934. I took too much mathematics in high school, because I knew that some of the college students struggled with math in college. It was too bad, because I’ve never used a bit of it!

After that, I attended Whitewater State College and left before earning my degree so that I could help mom and grandma with their boarding house. 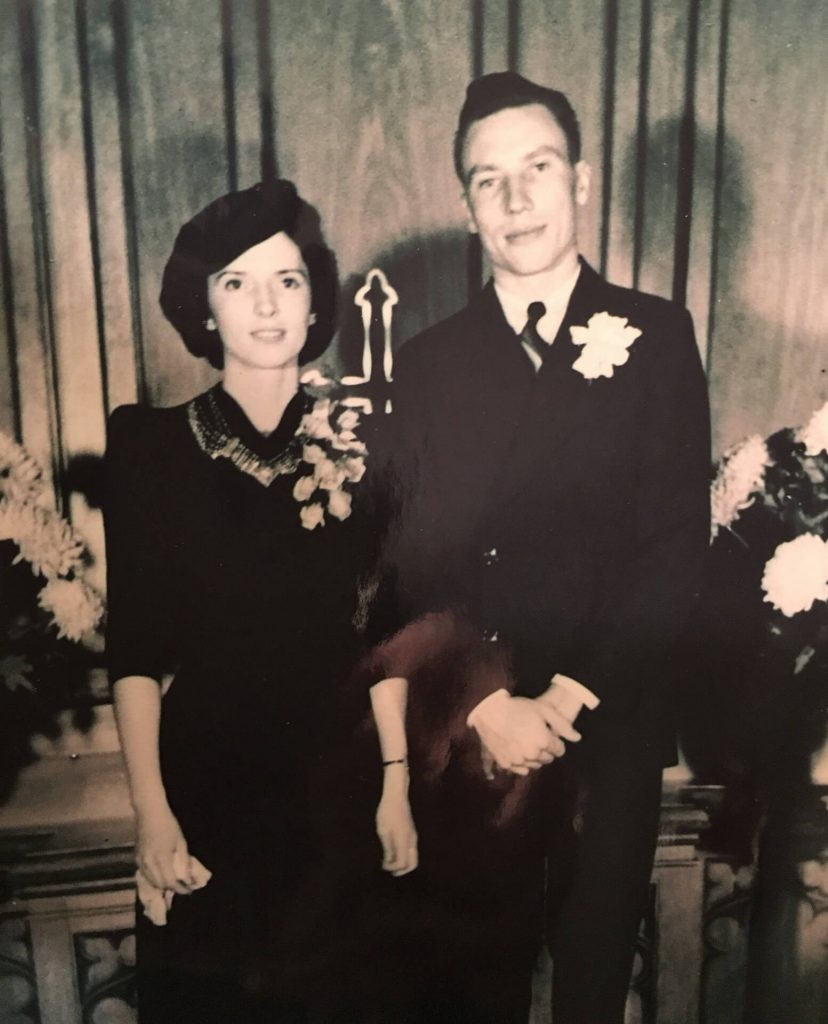 Wedding of Lucille and Louis

How did you first meet Louis?

I met Louis Sunby, a Miltonite, when he was in sixth grade and I was in fifth grade. He was a really good friend of my twin brother, but we didn’t have our first date until the graduation dance in high school. That was after he had completed one year of college. I was just getting ready for college. 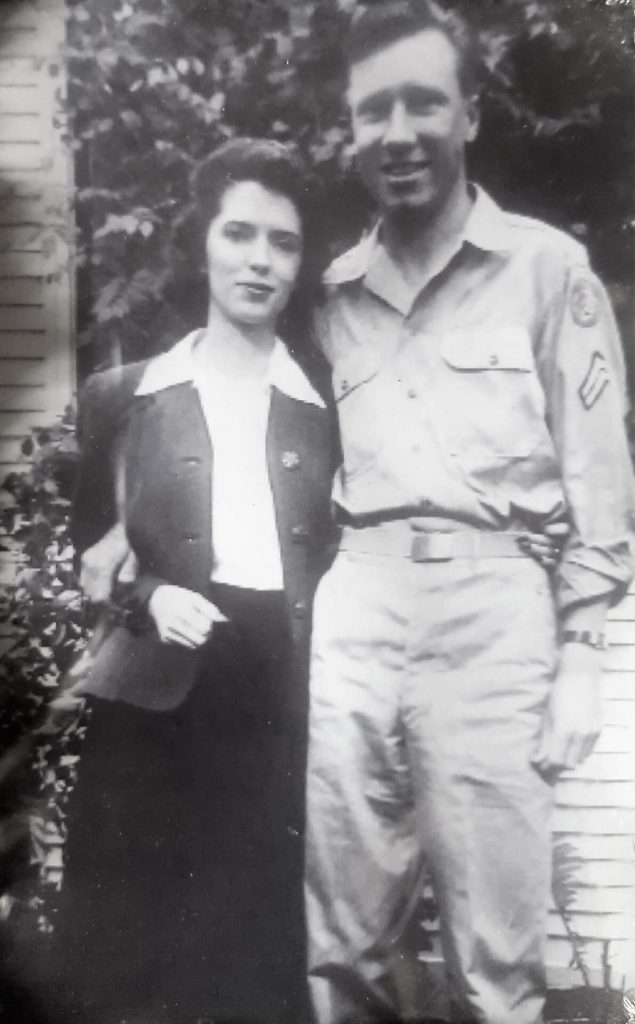 Tell me about Louis’ military service.

Louie was the first married man drafted into the war from Milton. At that time, we didn’t have Carol. He came back all in one piece, though, and that was a blessing.

He served most of time in England. He just couldn’t tell me where he was or what he was doing or anything. Later, I did figure out that he had some time off in London because I remember he said had had a clean bed for 25 cents! That was a real treat.

Tell me about your work over the years.

I worked in various jobs. During WWII, I was a Physical Therapy Manager at Percy Jones Hospital in Battle Creek, Michigan. Then, after that, I worked at Holmes Hardware in Milton and at Wisconsin Power and Light in Janesville.

I enjoyed working at the Business Office at Milton College and retired from there in 1977. 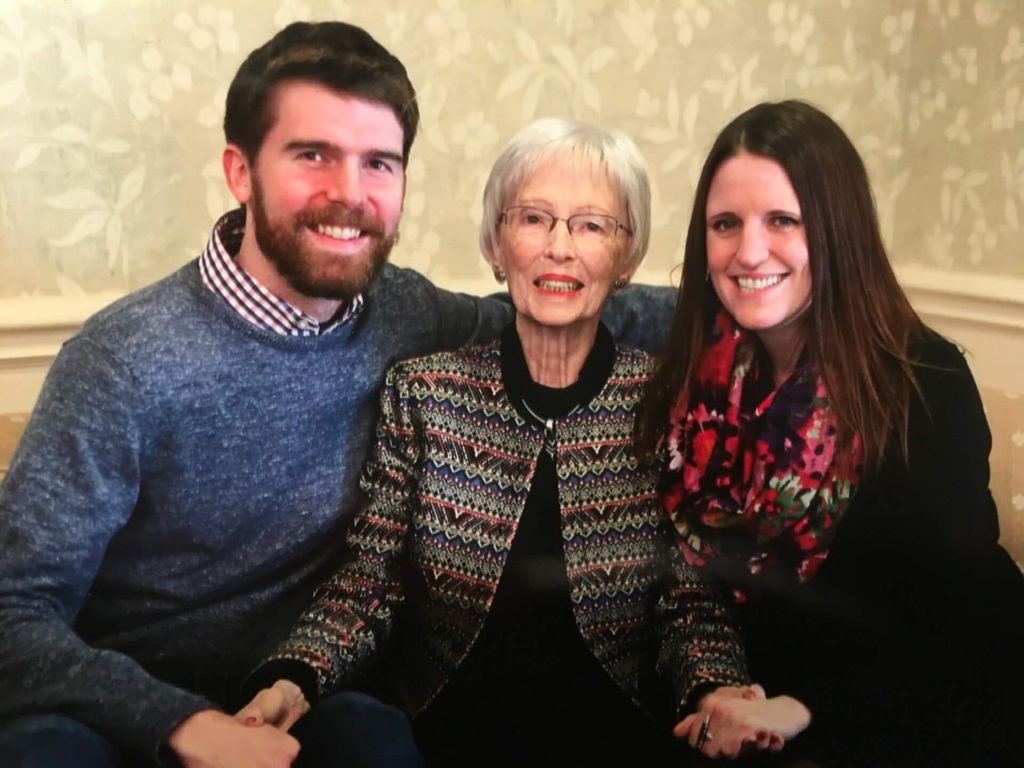 Lucille and her grandchildren, Rob and Emily

Tell me about your family.

My most rewarding work in life was being a wife, a mother and a grandmother. 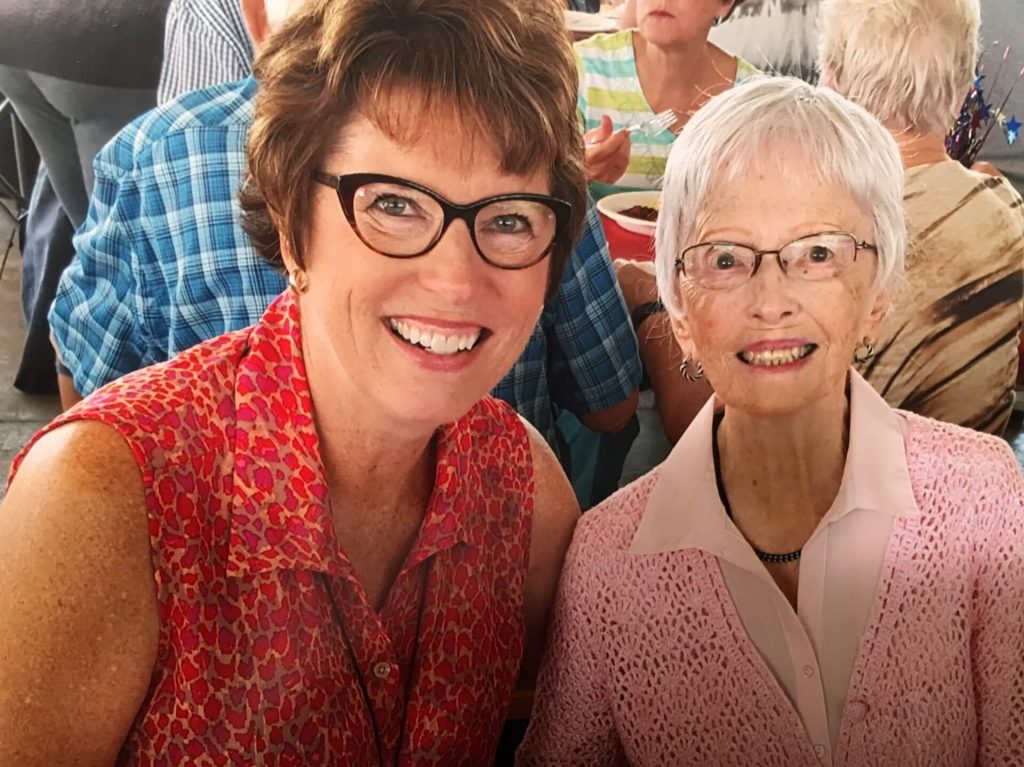 We have one daughter, a wonderful daughter, who has proven to be terrific help to me now. She does so much for me so that I can remain in our own home. 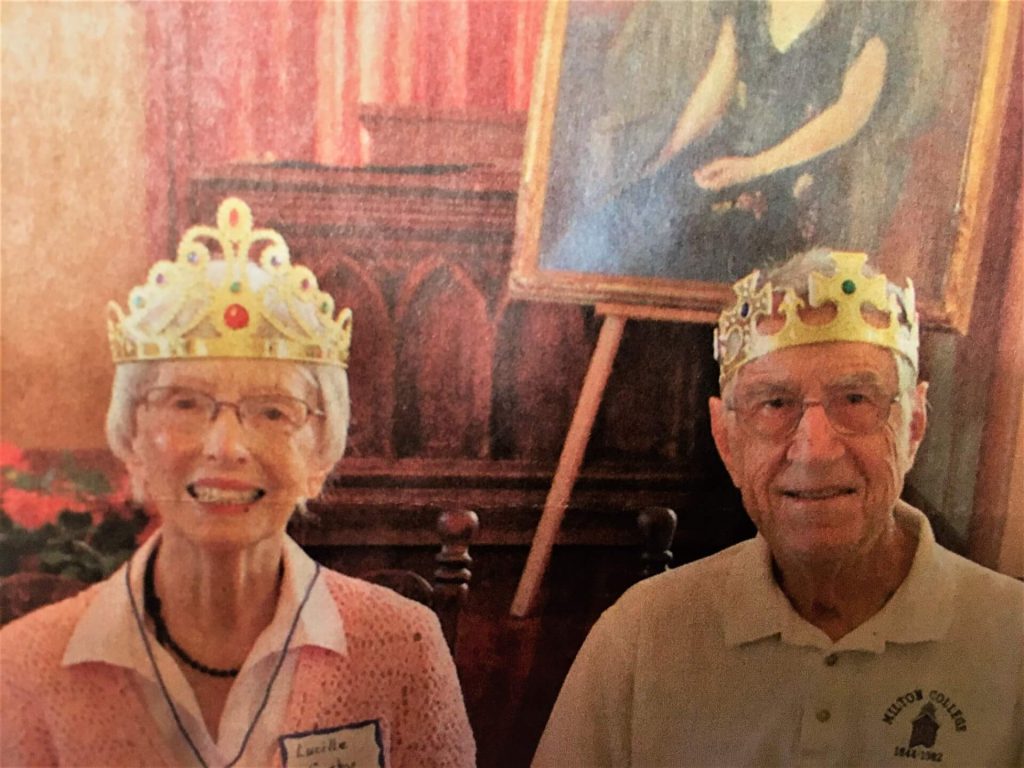 How have you been involved in the Milton community?

I’ve mostly been involved in the Baptist church and the Milton College. I think those would be the main things. I joined the church in 1926.

I’ve been a member of the Milton Woman’s Club and was also involved in the Milton Historical Society, and in the Milton College Preservation Society. I’ve enjoyed being in the Bridge Club for over 50 years.

When I was 100, I was crowned Homecoming Queen at the 2016 gathering of the Milton College Alumni.

Louie was also very active in the community. He was on the Milton board.

What have been some significant changes you’ve witnessed through the years?

If we go way back to our boarding school days in Dodge Center, Minnesota, we twins were invited to what was called a radio party. The granddaughter of the janitor of the school was the first person that we knew who had a radio.

Fortunately, all of our grades were invited to this radio party at her grandpa’s house. I had an appointment on that very day to have my tonsils out, but my mother thought it was more important to hear a radio, so the appointment was cancelled! I still have my tonsils.

I guess I didn’t really miss a lot because we didn’t hear anything on the radio with the exception of lots of squeaking and white noise from the dialing. There were about five dials across. It seemed like a lot at the time, and Mr. Livingston had to dial and dial. We never heard anything that was spoken, but we heard all the squeaks and sounds you know? Still, we had a good time.

The invention of the lawn mower has made the countryside so pretty when driving, just driving through the beautiful, big fields. It’s really a treat to drive through country especially in the springtime.

Using electricity on so many, many things, like television, is certainly a big one.

Probably one of the greatest inventions is the present-time internet. I was foolish to not take advantage of that when I really had a good chance to learn it, closer to the time I worked. But, my friends talked me out of it because they said all you do is to learn to play a few games and get a few recipes. I didn’t feel I needed either one of those choices.

One significant change in our community’s history was the joining of the two villages together. This is the 50th anniversary of the two towns joining, and it’s very nice to have a larger area here.

What were your secrets to everlasting love?

Well, I think one of the secrets is liking a lot of the same things. 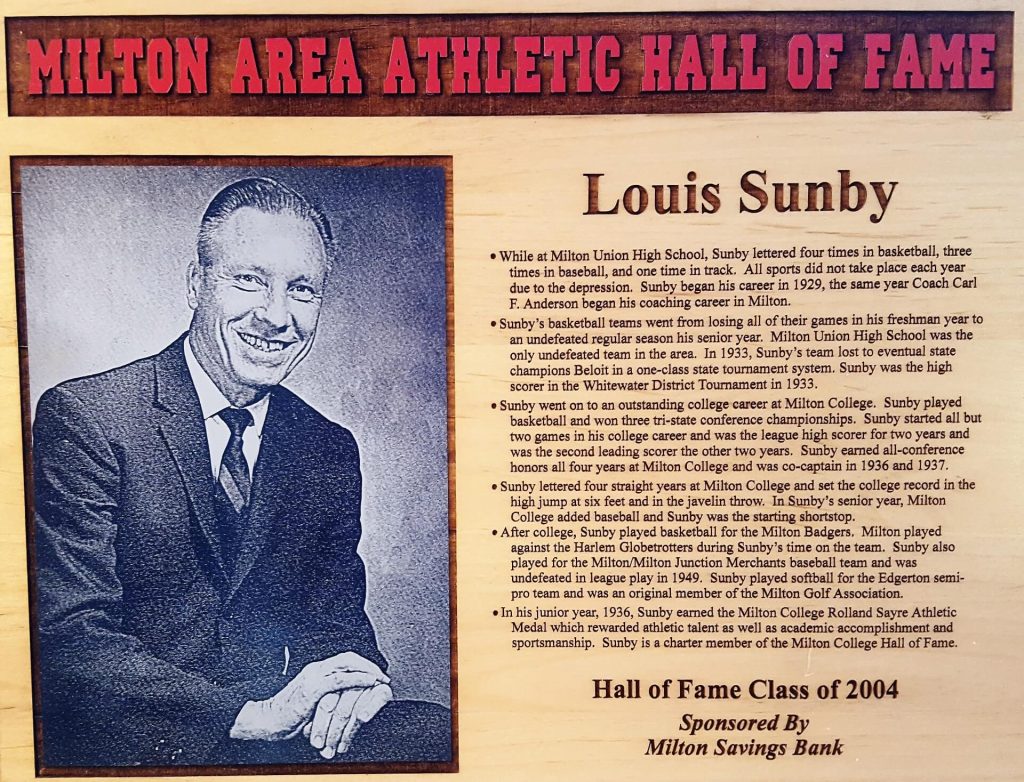 Louie was a very fine athlete, and I said my claim to fame would have been that I was seated on the most bleachers, because I enjoyed the games and followed him through baseball, softball, basketball. He didn’t play football because his mother had asked him not to because his two eldest brother had been injured, though not seriously. Still, she didn’t want Louie to play and he never did. 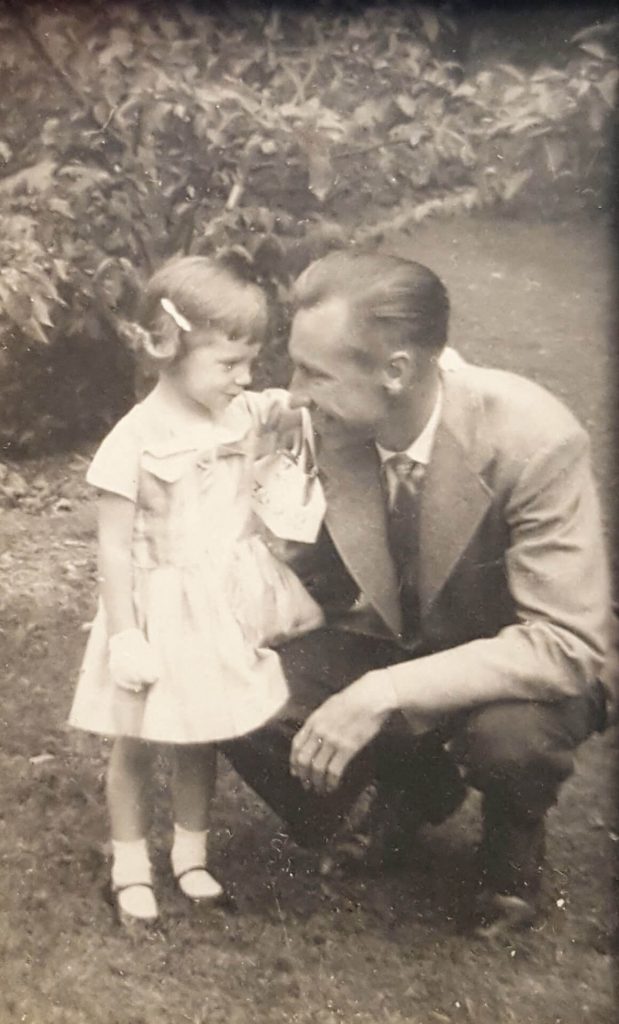 Carol and her dad, Louis

He was a wonderful father. We had a good time, that’s for sure. I can’t remember any problems, never any cross words.

We enjoyed our vacation time, too, but our lives were mainly right here in Milton.

We were married for 71 years and we have lived in the house for 62 years! We had a really good life. I’ve been a happy person.