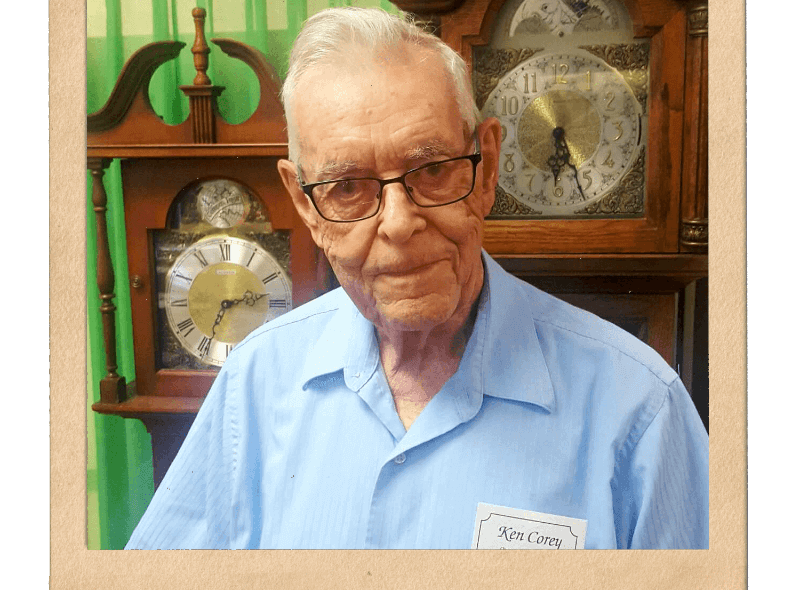 Well, I can remember when it was about 21,000 people. When I was young, my 2 brothers and I would get our bikes and go down to Fuder Cycle Shop, which is where the new Bodacious Shops of Block 42 are now. He had a side mount on his motorcycle for his wife. We would go down there if we had trouble with our bikes. We went all over Janesville when I was about 12, 13, 14 years old. We knew every street.

My schooling was in town until I was about a sophomore in high school. My dad was a teacher in the city of Beloit and they had passed a law that teachers had to live in the same town where they taught. So, we moved and stayed there a couple of years in Beloit. I enjoyed Beloit. Then we moved back to Janesville. I didn’t graduate because I joined the Marine Corps in 1943.

Tell me about your time in the military:

When I joined the Marine Corps, I never saw another person from town, so that was kind of strange. I went to Officer Training at Notre Dame, and after a while I decided that I didn’t like being in college and wanted to go to the war, because it was the war to end wars. So, I went to the Commandant of the Marine Corps of Notre Dame and I said, “I’m not happy here.” I was 17. And he said, “Is that so?” Next day I was headed for San Diego Boot Camp.

I had 6 months of training, and then I was shipped to Honolulu, Hawaii, and at that time we guarded the big oil tanks. There were, of course, a lot of people of Japanese descent there, but they were loyal to the United States. Then one day, a kamikaze pilot killed 2 Marine gunners aboard The Santa Fe, and so I was a replacement.

I left Honolulu on a plane and landed in Guam, which was still partly controlled by the Japanese. There I met my brother right on the island of Guam…I didn’t know we were going to meet each other! He was 4 years older and was a lieutenant in the Navy. So we spent the night together.

I went on and caught my ship The Santa Fe. There were about 12 Marines aboard, 1,100 people on one of those little cruisers, not even as wide as my store. We were all over the Pacific, even at the big Battle of Iwo Jima. I remember a Marine pilot came aboard and said, “Oh, you guys got it pretty nice, getting a bunk every night.” And that day he was killed. So, that was one of the bad things. Iwo Jima was a bad situation. A lot of Americans lost their lives.

We helped to rescue a lot of men aboard The Franklin. There’s a lot of history right there and many articles written about it. It’s really interesting. But, I saw a lot of men die there. Then the USS Houston heavy cruiser came along and towed The Franklin 10 miles an hour all the way back to Hawaii. That was a real experience, though not necessarily a good experience.

How did you get into the jewelry business?

Then I came home in 1946 and went back to Notre Dame. I took business. Then my folks owned the C-M Office and School Supply store. Both were teachers. But, it was during the depression that they started the business. They had that store for about 60 years! They sold student books, pencils and all that stuff. I helped out at that store and learned the retail business.

Then, Mr. Dubes was a customer at C-M, a friend of my dad’s. He came in the store one day and said, “I want to sell the jewelry store”. So, my dad and I came down, shook hands with him, and paid $28,000 for the business. That was a lot back then. That was in 1952. I remember when I bought it; they had a Wisconsin Jewelers Association. You had to be licensed to be a watchmaker.

I remember going in there and they said, “It’s not a good time to be buying a jewelry store.” I was only 25, but I went ahead. I’ve seen a lot of stuff, learned a lot. I took a course and learned the business from the ground up. That’s when I started. It was just me, and my wife helped a little. She’s an ordained minister, but she would help out when needed.

So, that was the start of the store…and 65 years later, here we are! I always had a watchmaker and a jeweler, and one of the big important things is that I have a gemologist. He knows diamonds. That was a category you would hardly hear of…for a jewelry store to have a gemologist, one who studied the field and all. He’s a good guy, knows a lot and helps me. I didn’t know every aspect of jewelry, but to have someone who knows, it’s nice to have him. They all help me run the place.

What are some of the changes you’ve seen over the years?

We’ve seen a lot of changes. It used to be that everything was downtown. For example, at Christmastime, it was so busy that you would have to walk in the street because the sidewalks were full, just to get out of peoples’ way! So, businesses have changed a lot, the downtown changed a lot. We have a lot of history here, I guess. The brick and mortar stores are not what they used to be, but you go with the changes.

I remember in 2008 the water from the big flood did come up in the basement about an inch. Riverfront Center used to be Woolworth’s originally, and when they rebuilt it, they put in a sub-basement, then a bunch of rocks, and then another basement floor in. That had about 50 different pumps in there. But, the water we got was actually coming from the west of us. Chase Bank had pumps running 24 hours a day for about a month! But, it was just in our basement, so we stayed open. That was quite a shock!

Now they’re revitalizing the downtown. There’s construction going on out in back. They’re building a fountain to the back of us and there will be a park and a walkway that will lead to the store.

Do you plan to stick around the area?

I plan to stick around…but I’ll be 92 in another month! I come to work every day except Wednesday. My wife died about 2 years ago. I’m not a “joiner” but I’m active in the church.

My son and daughter, who are both retired, we go out to eat every Wednesday and then go somewhere interesting, like the Olbrich Gardens in Madison, or down to see the Sandhill Cranes in Roscoe; we kind of combine fun with a little learning. I read the paper religiously every morning, and all the trade journals. You can never stop learning.