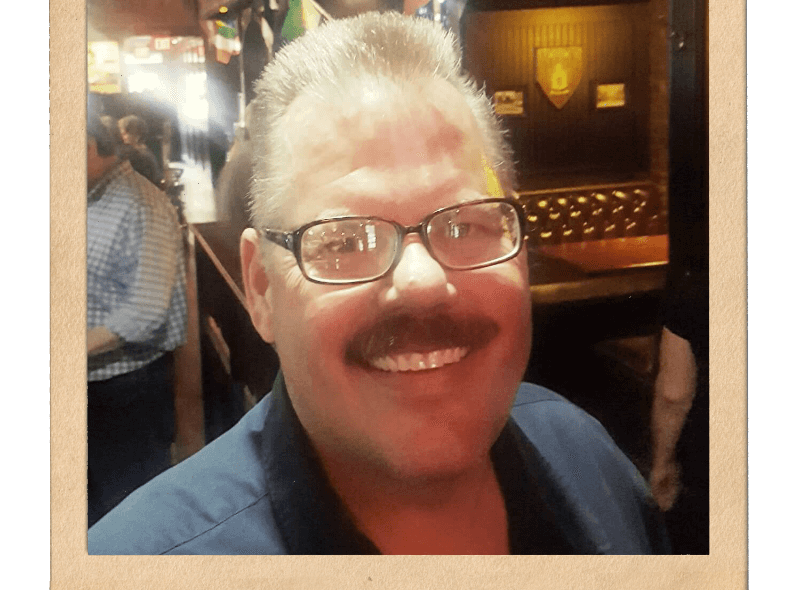 Tell me about growing up in Janesville:

I was born in Janesville, Wisconsin at Mercy Hospital. My family lived here. I remember I spent a lot of time fishing on the Rock River. I also spent a lot of time with my family. Both sets of grandparents were within a couple of blocks of where I grew up, and there was a lot of extended family nearby.

I went to Madison Elementary, then Franklin Jr. High and Parker High School graduating in 1984. Then I went to Whitewater for one year and moved to Arizona for a year.

What did you do when you returned to Janesville?

When I moved back I started my business in 1986, working as hardwood floor contractor. It was called American Hallmark Wood Flooring. I still do it today, 30 some years later.

How did O’Riley and Conway’s get started?

Well, this is an old family tavern, Quaerna’s Tavern, which was opened right after prohibition in 1933 by my great-grandfather. He ran it until about 1948, and then my grandfather took it over until about 1990 when my dad took it over. I bought it from my dad around 2003. My Uncle, Ed Quaerna, and I shut down in 2009 to convert it to an Irish Pub.

I happened to be doing contract work with companies and pubs in Ireland, plus Irish pubs around the United States. I got a good feel for what an Irish Pub needed, what techniques they were using, type of interior design work. So, I brought a lot of those ideas down here when the time was right.

My name Quaerna is a Norwegian name, and the portraits of my Norwegian great-great-grandparents, Edward and Hilda, who both came over from Norway, hang in the back area of the restaurant. My Irish side came from my great-grandmother Mary who was 100% Irish, and my grandfather Bill Riley who was also 100% Irish. We added the ‘O’ because they took it off when they came across as immigrants. There’s a Conway side, and that came from my great-grandmother, Mary Conway, hence the name O’Riley and Conway’s.

It’s nice here, not too stiff, a lot of fun, we have a great staff, good products and atmosphere, including live music. We have 54 Beers on Tap and over 100 different beers total, a wide variety of beers from local to European, and a huge selection of scotch and whiskeys, that’s for sure.

Tell me about some of the changes you’ve seen in Rock County over the years:

I think the biggest one was General Motors shutting down. But it seems like Janesville is diversifying pretty well, reinventing itself. It’s kind of skipped off the bottom here seven years later it’s on the upswing now. The next 10 years are going to be really interesting to watch, how downtown Janesville develops and shapes itself. The future will hold a lot of interesting things down here, I’m sure.

What are some positives about Rock County that make you feel good about staying?

It’s an industrial county; a river runs through it, close to Chicago, Milwaukee and Madison. It’s kind of a nice little pocket. It’s affordable, I think people like that. Rock County has a pretty old history here from the 1840’s…it goes back a ways. There’s a large Irish heritage here, German and Norwegian, as well.