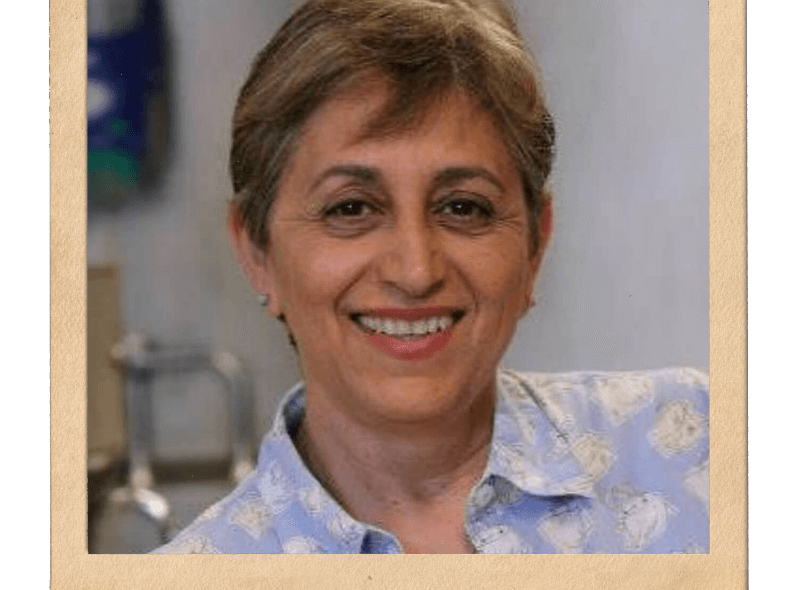 Jaleh Dabiri is the owner of Hilltop International Pub in downtown Janesville.

Tell me about moving here and your first impressions of Janesville.

I moved from Iran in 1975 to California, and in California I never felt any “different”… not until I moved here. I moved to Rock County in 1995, because of the investment in the building we bought downtown. My first impression was that I didn’t want to live here. I felt that way because I had lived most of my life in Los Angeles and I didn’t know anybody. I felt like I was not included. But, because of our business, it wasn’t that difficult. If it hadn’t been for the business, it would have been a big struggle.

Even the conversations were different here. I would talk to an adult man who would say, “I was born and raised in the house that my dad was born and raised in.” I never had that conversation with anybody in California! Or I would hear, “My uncle lives next door” or “I’m in the same business that my family has been doing” or they’d have to get approval from a family member to go somewhere. Everyone seemed to belong to a group here; they were not as open to just any individual. It was like there had to be a reason to talk to you. It was a struggle.

But, there’s less of a status issue here. People are really laid back, they don’t have to rush, I don’t see that hurriedness, where every minute of life is on a schedule like in the big cities. Coming from Los Angeles, where people from New York thought things were “slow,” I felt the relaxed pace of life here in Janesville.

What are some changes you’ve seen in Rock County?

I have seen a lot of people come to Janesville now who are different. That group that was born and raised here had never seen much diversity, and it was 7 or 8 years after living here that I first saw a group of African American children playing in the park. My niece came to visit one time, and I asked her what she noticed about the community. She said to me, “Everybody is so white.” She lives in CA, and she sees a lot of Asians, Blacks and Hispanics.

Diversity is not only in look and shape, but what you know about other ethnic groups. I feel like I’m a walking museum. I try, really, I feel like maybe I was meant to come here, to help educate people on what a woman from the Middle East looks like. I have worked with the School District of Janesville, I have had a public business, and I was very involved in the community in any way that I could. And I’m proudly working on the Diversity Action Team membership still, just because I think it’s needed.

The more we let our neighbors and coworkers and friends know about us, the less fear there is, and if there is no fear, we become closer.

Tell me about your business career.

I’ve always had a business here, but at some point we leased it out. But, now we are back in the same lounge. I invite everyone to come on Wednesdays; we serve tea, coffee and talk about art, networking about art and music.

I love to bring the community together in a different way. We all have work and responsibilities, but one beautiful thing that always brings us together is music and art, without even thinking about how different we are. I think our differences are so minimal compared to how similar we are. I’d like to see the whole community involved in art and music. It’s been working well; people write, come in to talk, they talk about their lives, or about immigration. I’m very excited.

Tell me about your family life and about education in Janesville.

I have a wonderful husband named Fred, and I have a daughter, Mina. When Mina was 3 years old, one of the biggest fears I had was that I might hold her back in her education. But really, she had wonderful opportunities here.

Mina went to a school where she had options, like AP classes, she had sports, music and opportunities. I could go to the events, and people were so loving and caring. I still miss those parents, and the grandparents even came, and would ask about my daughter. That was wonderful, that the grandparents could come to the games.

In California it was difficult to be involved in sports, they had to make so much money to pay the bills and the distance made it difficult. The closest opportunity to work was at least 45 minutes out. Then families didn’t have time, one had to work while the other ran the kids around. But here, Fred and I made sure we would go to the games and events, and I was excited to go. That was something that couldn’t happen in big cities for me.

Our daughter had a great education here, she had opportunities, she was driven and she worked hard. I have great memories of her teachers. I think schools are great here. I hope it stays that way, because good schools bring more people. When she was in middle school, she was doing so well and had a good circle of friends, so I didn’t want to leave this community. And now she’s in medical school in Madison!

Now I know so many good people and friends here in Janesville, and I’m a people person and love to be with people! I wouldn’t want to leave.