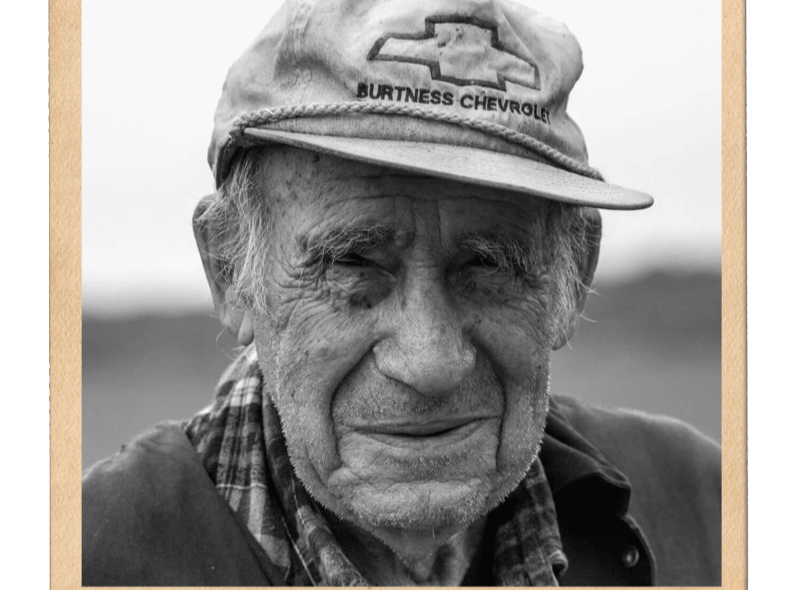 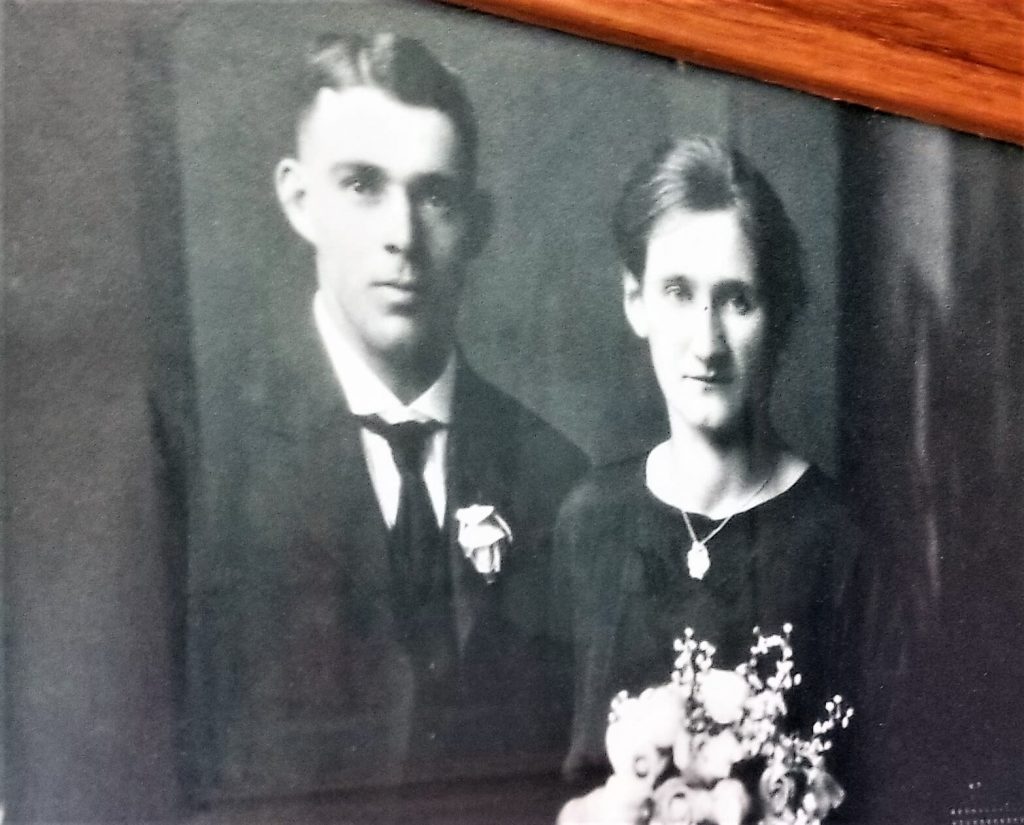 Tell me about your family coming to Wisconsin.

My parents came over from Switzerland shortly after WWI. They were in Green County part of the time, then they ended up here in Rock County.

I was the fourth child, I have two sisters and another brother. My dad was a farmer. He moved a lot until he finally bought this farm here. I must’ve been about 16 at the time.

When I was growing up, I thought I was big when I milked my first cow. And when I harnessed my first horse, I thought that was a big deal. We had to do all the field work, we had to plow and disc, and plant. We didn’t have tractors until I was 16. I had to feed the horses too, before we worked them. We had about six to eight horses.

Where did you go to school?

I went to quite a few schools. And I had to walk, there were no buses. When I was in eighth grade the teacher offered to have me stay with her, to go to the high school. I knew I was poor, and I didn’t have enough clothes to go stay with her. That was certainly a nice offer from that teacher.

I never attended high school so that I could work on the farm.

I met my wife, Dolores Mae, on a roller rink. We were pretty close. That was before I was drafted into the later part of WWII. 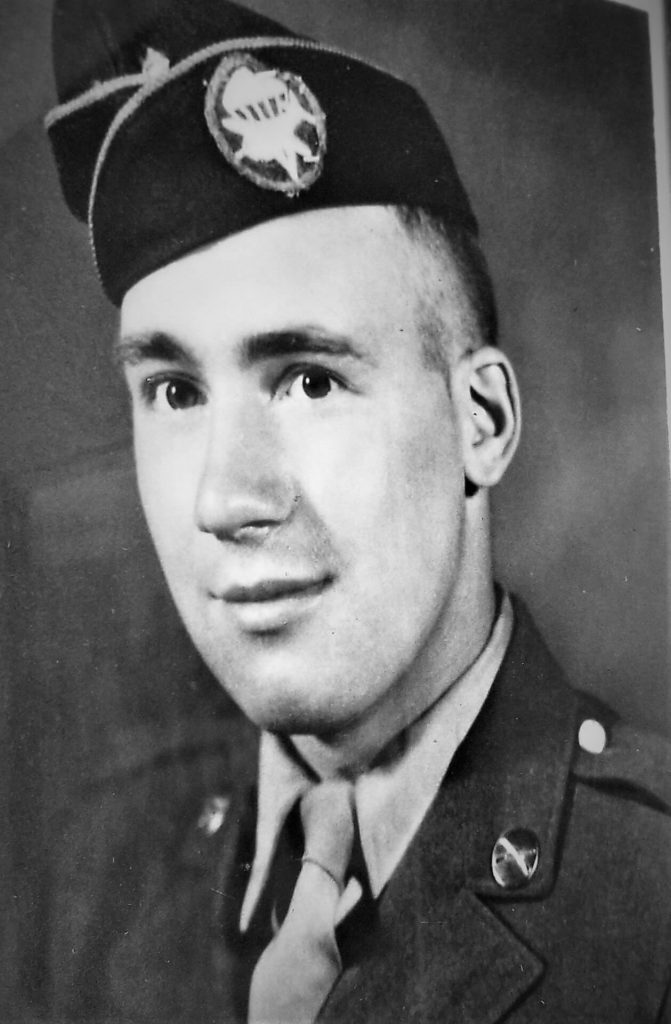 Harry in the U.S. Army

Where did the military take you?

First, I went off to California, and then I went down to Georgia where paratrooper training was. And from there I went overseas to Germany. I served in the U.S. Army 82nd Airborne Division.

They can’t make you be a paratrooper, you have to volunteer. And they give you $50 more a month being a paratrooper. It was a lot of money at that time. 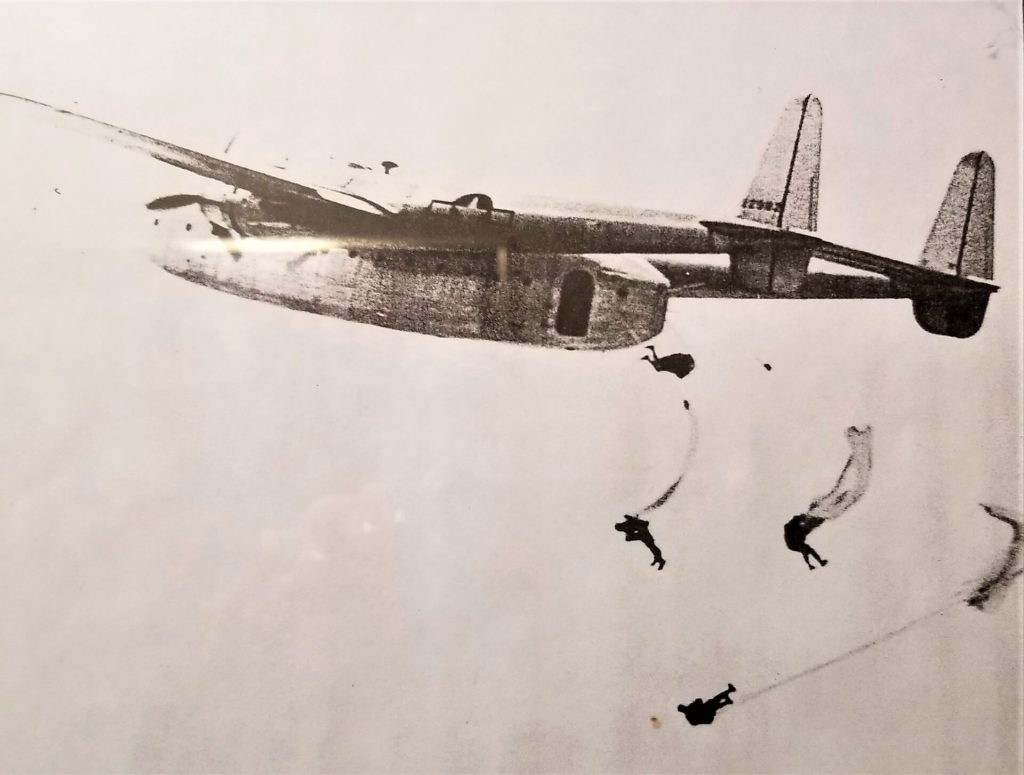 Were you scared the first time you jumped out?

Not really, I didn’t know what was going on. You jump at 800 feet and it doesn’t take you long to get to the ground. They don’t want you to get shot at, so you’re jumping at 800 feet.

On my last jump, near Frankfort, Germany, I cheated death. That’s the story I never tell my kids. I felt lucky. From 800 feet, if something goes wrong, you can’t stop and fix it, you just keep falling. 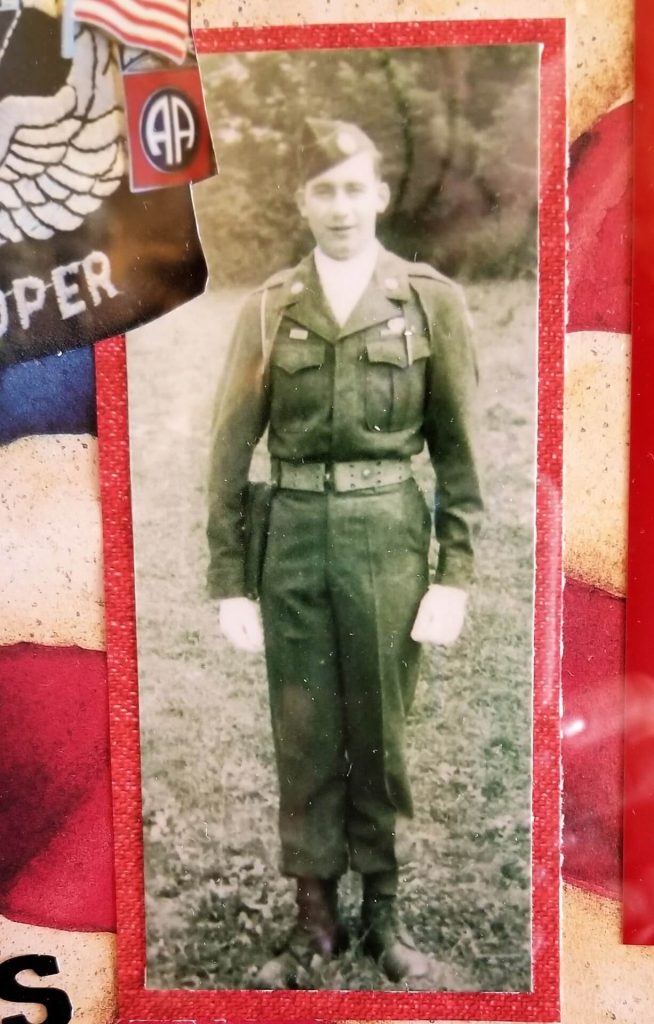 Was it still risky for you?

Oh yeah, it wasn’t the safest place. And the people were hungry. You don’t realize how hungry they were! We had Truman for president back in 1948, and he said we have to feed the people in Europe. But it took them two more years after I’d come home. They were so hungry.

I was on special guard duty, guarding generals. I made friends during the war, but I never kept in touch. It wasn’t as easy back then to communicate as it is today.

What happened after you came home?

After returning from The Service, I worked down there at General Motors, for a little over a year. Then I went back to farming. Then, I quit farming and went down to Fairbanks Morse, and worked there for 37-and-a-half years! I made the pistons that went into the standby engine in the nuclear cell. 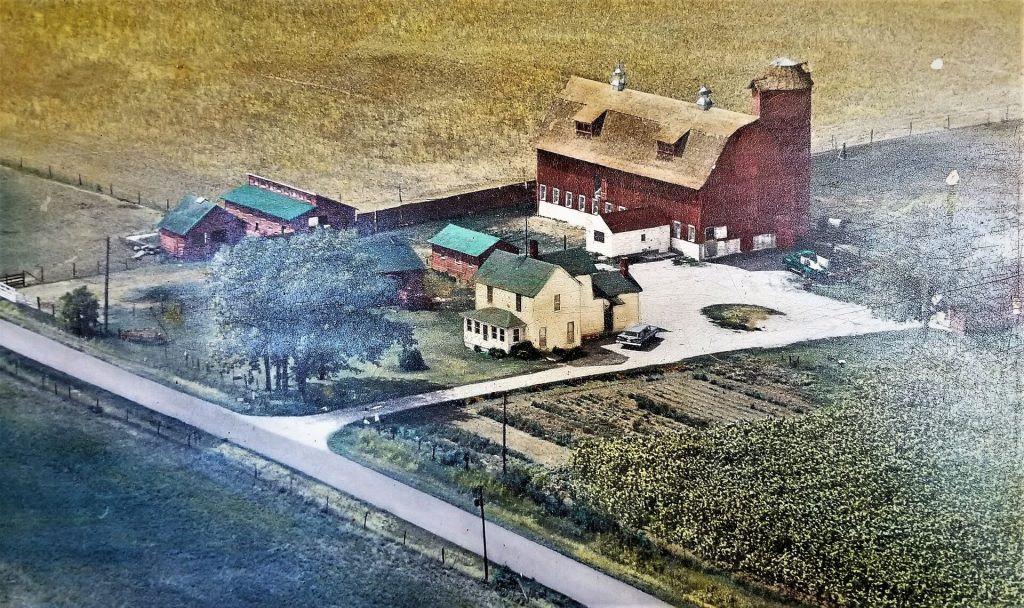 When did you come back to the farm?

Well, in 1962 I came and bought this farm. My parents had already passed. But I didn’t retire from Fairbanks until 1989.

I had seven brothers and sisters, but I was the one who needed the farm, so it went to me. I made the monthly payments. Some of my siblings helped. Mostly, my kids and my wife helped out. She milked cows, and drove the tractor. 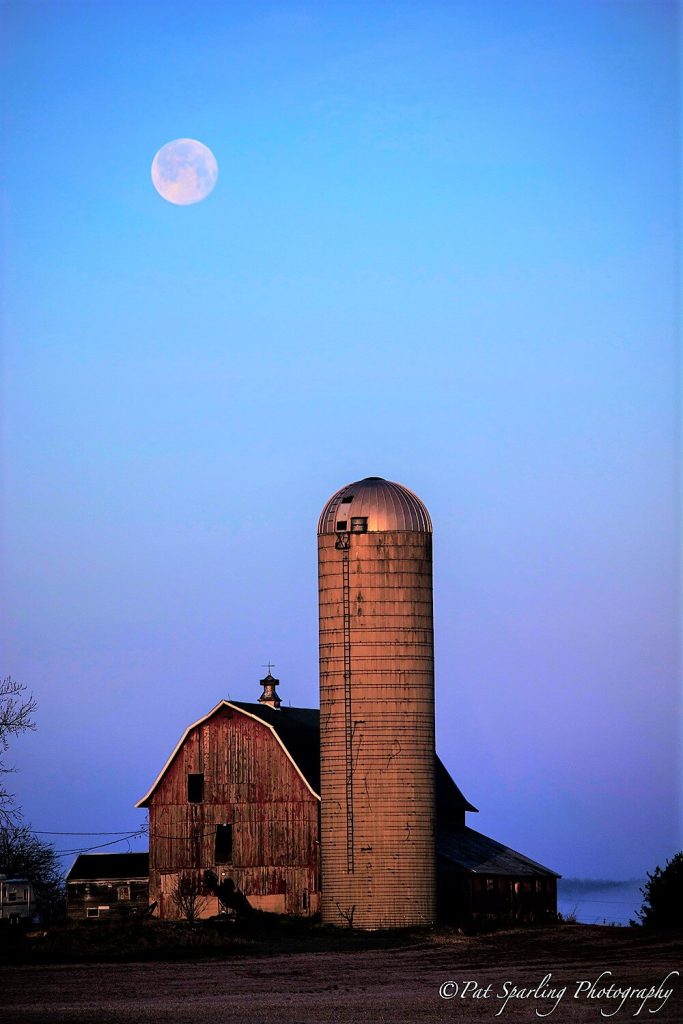 We had crops; corn, beans and hay for the cows. We had dairy cows and grew the hay to feed the cows. The milk went off to the milk company and later to the cheese factory. The milk cans would go in a tank of water on the truck to keep them cool. 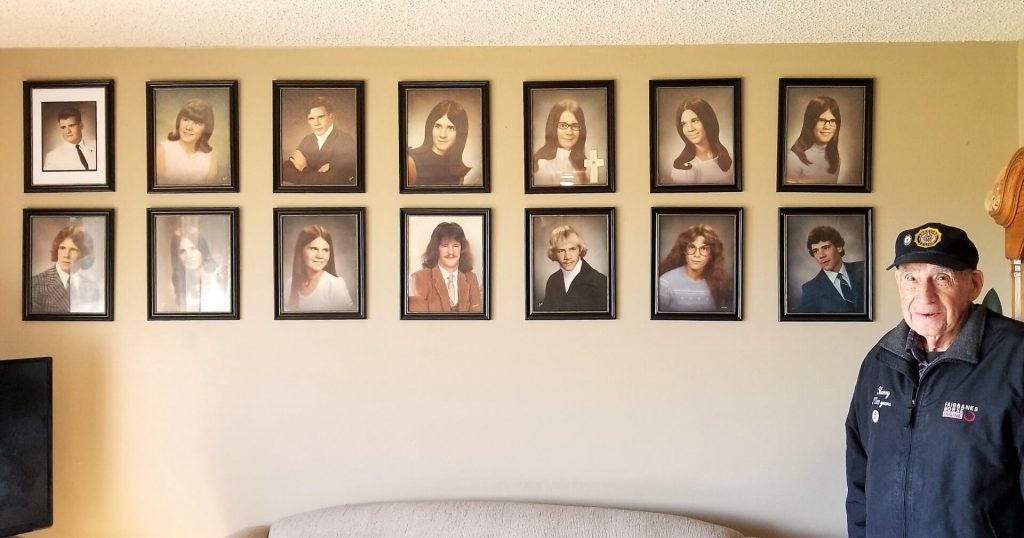 Harry is the proud father of 14 children

Tell me about your family.

My wife and I had 14 children over the years, eight girls and six boys. We lost one daughter in 1972 in a traffic accident. My oldest is now 70 years old. I have numerous grandchildren, recently had triplet grandchildren, plus great grandchildren!

My children live near Milton, in Janesville and in Beloit. And the oldest one is in Rockford. 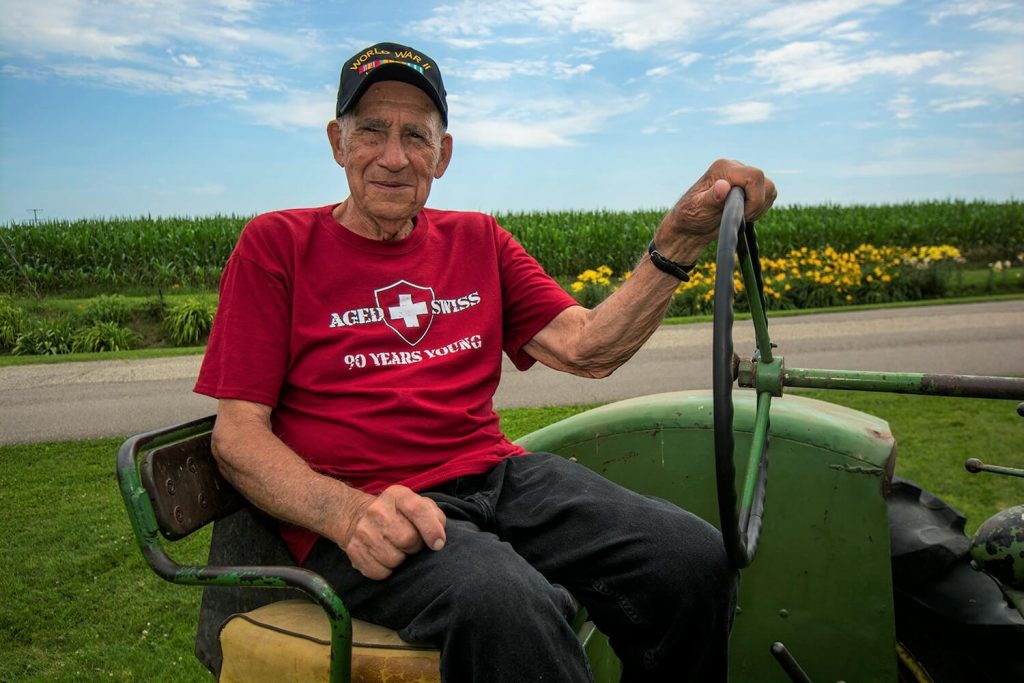 Harry on his tractor – photo by Pat Sparling

The kids still help me out. I’m 92. One of my kids has a 40-acre farm over by Orfordville.

Tell me about your community involvement. I heard you donate regularly to Salvation Army. Why do you do that?

Well, there are hungry people, and they’re starving. I have seen families just eating potatoes all day long. The money goes a long way, it feeds a lot of people. That’s why I give to Salvation Army.

I go down there and make sure they have some oatmeal. 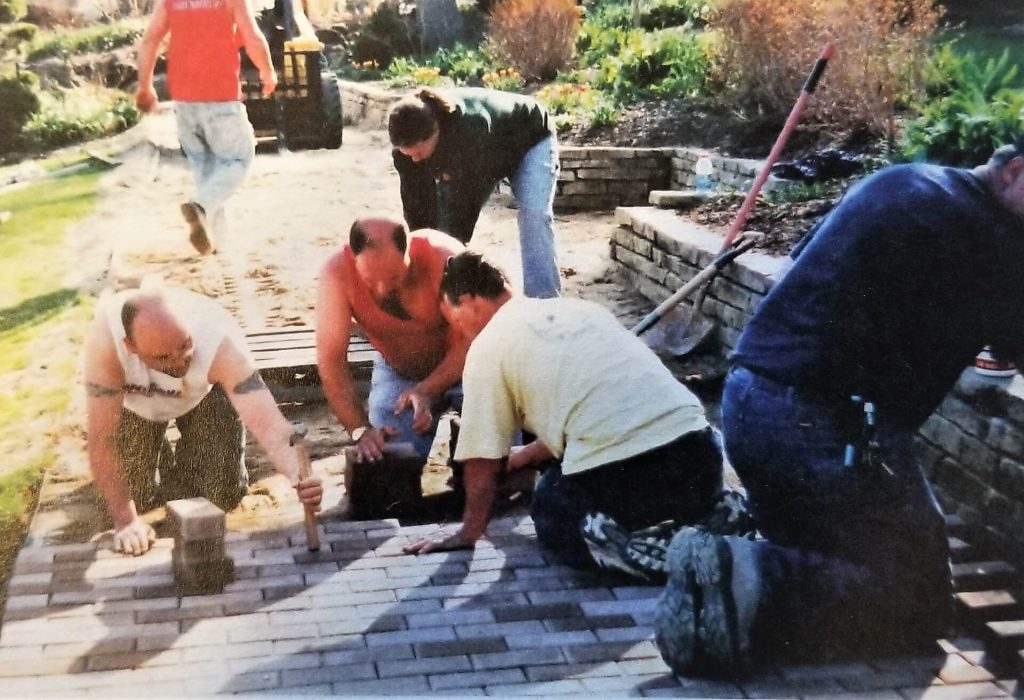 Tell me about the path, “Where Tears Run Deep.”

When they made the paths down at Rotary Gardens, I suggested to Mark Dwyer, “You should have a different color brick for the ones who lost their lives.” I just thought Rotary Gardens was a good place to honor the fallen ones. So, I donated to that 40-foot pathway and my kids helped put it in. The kids bought more bricks for the ones who passed away.

The bricks are a memorial for all the local soldiers who have fallen in all the wars. Most recently, there was a guy from Janesville stationed in California, a U.S. Marine who was killed. We got a brick for him, too. He gave his life.

In 2008, I helped donate a bench for Beloit High School graduate Tyler Kreinz. Tyler died while serving in Afghanistan in 2011. You can’t take the pain away from the family, but you can show them that you care. 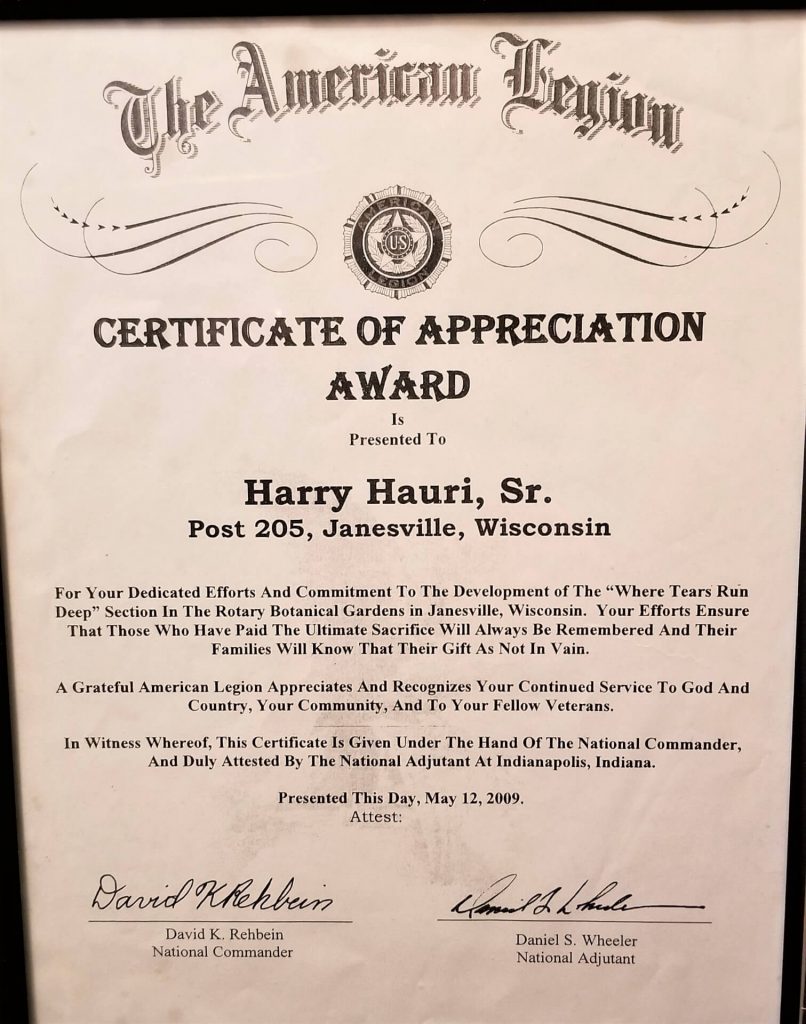 Award from the American Legion

When I left Europe, it was hard to see the graves left there. I could come home, but they couldn’t. I thought that was sad.

My kids and I go down to Rotary Gardens to see the walkway. It’s a nice place, right by water. I thought that was the best pathway there.

At Christmas they really light it up during the Holiday Light Show. Last year, I didn’t have to put many lights up, I’d just go see theirs. They really were pretty!

I received an award from the American Legion for that project. 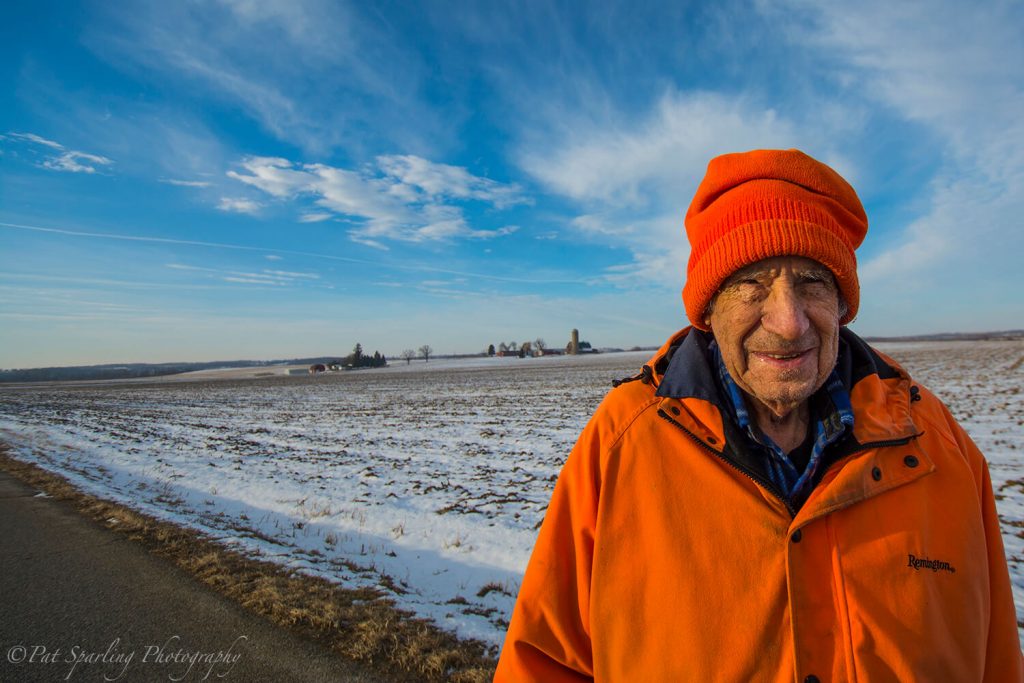 Harry on his daily walk – photo by Pat Sparling

What’s your secret to such a long life?

What keeps you here in Rock County?

“You can’t take the pain away from the family, but you can show them that you care.” ~ Harry Hauri