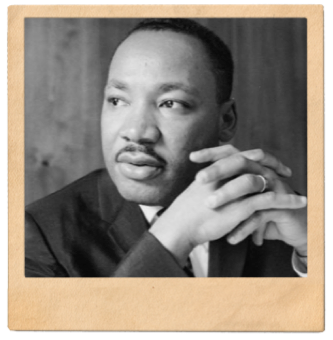 “Injustice anywhere is a threat to justice everywhere. We are caught in an inescapable network of mutuality, tied in a single garment of destiny. Whatever affects one directly, affects all indirectly.” –Martin Luther King Jr. from ‘Letter from Birmingham, Alabama Jail’ April 16, 1963.

Upon a simple Google search of “black youth in Wisconsin” the top articles that pop up are, “Wisconsin tops US in jailing of black men,” “Wisconsin’s black-white achievement gap worst in nation despite decades of efforts,” and “”Wisconsin tops nation in black joblessness.” 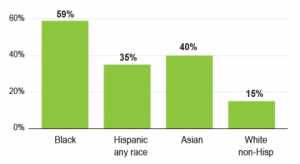 While African American or black youth currently comprises around 14% of the United States youth population (Rock County only around 5%), in 2018 minority youth will represent the majority of the nation’s overall youth population. In the past few years, Wisconsin has consistently been ranked near the bottom (if not the last) in disparities between white children and their non-white peers, giving the state the reputation as one of the worst places for African American youth. 59% of black children live in poverty in Rock County for the period 2009-2013 in comparison to 35% Hispanic, 15% white Non-Hispanic. Graduation rates in 2015 for white students were 93%, while only 66% African Americans students graduated.

The Annie E. Casey Foundation, a private non-profit organization with a mission to build better futures for disadvantaged U.S. children released a 2013 ranking showing Wisconsin as 50th overall for black children, 17th for Latino children and 10th for white children. Only 20% of black children live in a household of economic security, compared to 33% of Hispanic children and 70% of white children. These state rankings looked at 12 indicators that comprised the overall rankings, with Wisconsin ranking worst in four* of them: High school graduation, delayed childbearing*, school or work*, low poverty areas, normal birth weight, two-parent families*, math proficiency, associates degree*, above 200% of poverty, family education, preschool enrollment and reading proficiency.

Superintendent of public instruction of the state of Wisconsin since 2009, Tony Evers, on the matter of black-white youth disparity as “extraordinarily horrible” issue asks, “Can we do more in our schools? Yes, and we should do more. But the fact of the matter is, we need the entire state to rally around people of poverty or this will never be solved in a satisfactory way” (Wisconsin Watch 2015). 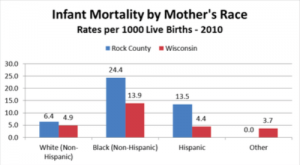 Growing up in chronic poverty is directly related to stress levels that affect a person’s mental and physical health leading to brain development, social, emotional and economic wellbeing. It is also interesting to note Wisconsin ranks second highest (with .2% difference between top ranking) in Non-Hispanic Black infant mortality rates. And in the state of Wisconsin, Rock County consistently has the highest infant mortality disparities in the state, with Beloit holding the highest number of black infant mortality in the county. In 2009, statistics showed a 17.7 rate of infant mortality among black mothers, compared to 5.1 among white mothers. [Infant mortality is defined as the rate of how many babies do not live to the age of 1, due to premature birth, cognitive defects, unsafe sleep circumstances and accidents]. 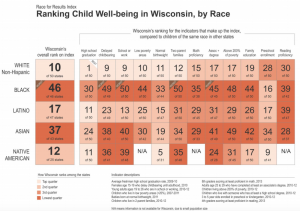 Rock County is striving to better themselves and community members are working together to improve these numbers. The biggest event is the March of Dime’s March For Babies: A Fighting Chance for Every Baby, which in previously years has taken place in Janesville’s Palmer Park. Nearly $30,000 was raised in 2014 by Rock County families, and almost $25,000 was fundraised in 2015 to go towards helping mothers with their pregnancies and births.  The next March For Babies will be held in Madison on May 13th.

It is important to know the community’s history and each other’s stories, especially when regarding racial and economic disparities, to move towards a more diverse community. Thank you to the Wisconsin Council on Chidlren and Families as well as the Annie E. Casey Foundation for collecting and analyzing related data.  Please contact the RCHS Story Squad if you have any stories you’d like to tell. This month’s theme is stories involving love or hate (or both). Either write yours in person at our Story Wall at our Janesville campus, through our website form, tagging #HistoryInFocus on your Instagram post, or by contacting LeeAnn Severson, Marketing Manager, at lseverson@rchs.us if you’d like to help collect these stories as a member of Story Squad!