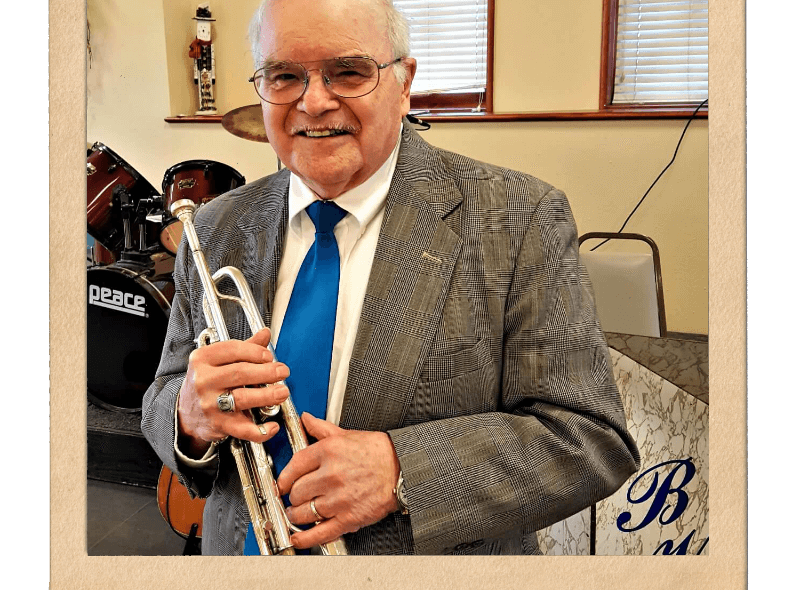 Dave Parrish is a retired Episcopal Priest and Director of the Blue Velvet Dance Orchestra.

What brought you to Rock County?

We came to Rock County from Minnesota in 1993. We have grandchildren who live in Evansville, so we came over and settled here.

I’ve had two houses in town. The last one we’ve been in for 24 years, the first one was 11 months.

Tell me about your work.

By profession, I’m a priest in the Episcopal Church and I retired when I came here. However, I did serve as Interim Priest when they were between clergy at Trinity Episcopal Church. I took over while they were looking for someone.

In my retirement I’ve been Director of the Blue Velvet Dance Orchestra. It’s really full-time work, more than you’d know! I have to get a program going for our performance at the Senior Center every week.

The orchestra was established when I first came here. It’s been going 29 years, and I’ve been directing for the last seven years.

Is your family musical, as well?

My parents got me started on trumpet in the third grade. I then had my own band in high school and college, and I’ve been playing ever since!

Tell me about your education.

I went to the University of Minnesota and graduated with a Sociology degree and Music minor. Music has always been a part of my life. I played in the University of Minnesota Big Band for their football games, played in all their concert bands and everything. I decided it wasn’t smart to get your degree in music, so I got it in something else, which then for ministry was perfect. Sociology is a good lead in to that.

How did you get into ministry in the Episcopal Church?

I grew up in the Episcopal Church right from infancy on, so it was a normal transition.

I had taught private trumpet lessons at MacPhail Center for Music in Minneapolis for about two and a half years. I quit there and, right after that, I went into the seminary.

Did you ever use music in your ministry?

I directed a youth orchestra in Pennsylvania where I was a Certified Hospital Chaplain assisting a parish there. It was kind of a kick. They were high school kids.

So, that wasn’t too challenging, right?

What is the Blue Velvet Dance Orchestra?

From the City of Janesville’s website: The Blue Velvet Dance Orchestra, under the direction of Dave Parrish, performs at the Senior Center every Friday morning from 9:30-11:00 a.m. Rehearsals are Wednesday mornings at 9:30 a.m. The band is complete with brass, woodwinds, guitar, banjo, piano and organ. Anyone interested in joining the group can contact the Senior Center at (608) 755-3040.

How did you get this position as Director of the Blue Velvet Dance Orchestra?

Because I had my own band back in the 50’s, during high school and in college, I had the background to do this. Our director had some health issues and had to go to the hospital.

He said, “I have to go to the hospital, I have a lot of stuff going on, it’s going to be kind of tough. Is there anybody here with the background and experience who could take over for the time period?” I was playing trumpet in the band at that time and I just raised my hand.

And here I am, after seven years, doing this thing! 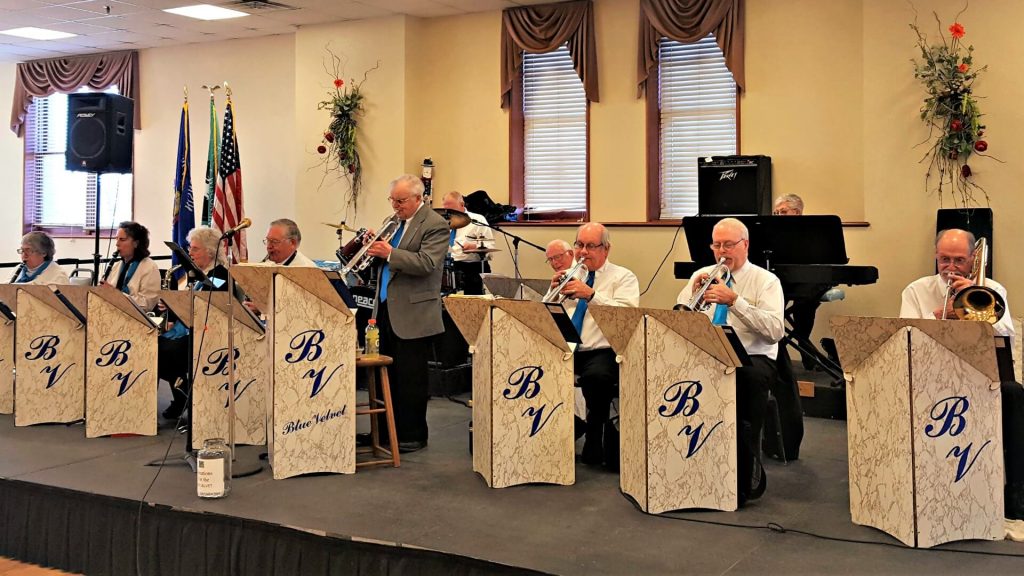 As Director, how do you choose your music?

We have four major books, so we have about 250 tunes! I inherited three of those books and I move them about every month or month and a half we use a different book. So, it’s totally different in terms of what we’re playing, and you won’t hear the same tune for about a year.

The latest is an addition of 84 tunes with a whole new book. Those are professionally orchestrated, so well. The other three, our former director orchestrated and arranged himself. This new one is really exciting the group. They really like playing it.

Tell me about your members.

There are 19 members total in the group. Most of the members are from the Rock County area, but we have people from Illinois, someone coming in from Madison, and we have people from the towns out and around. It’s a lot of traveling for some of these people. But, they’re here every Wednesday and every Friday. They’re very loyal, which is very helpful!

I have three former directors who are current members of the band. Once they connect, they stay. The oldest member I had was 92! He played 2nd trumpet.

Some of the orchestra members shared their experiences:

“I’ve been drumming with them for 10 years. I’ve been a drummer for 60 years! When I was in high school they asked, ‘Do you want to be in the choir or the band?’ And I said, ‘I can’t sing.’ So, they said, ‘You’re in the band!’ I enjoy playing music here.”
~ Michael Ryder

“I’ve been with the group about seven months. I’m a retired band teacher, played in about four polka bands over the years. It was nice to join this. I play tenor sax and clarinet.”
~ Ken Hanson

“I play trumpet, 2nd and lead. I’ve been with the group about a year. I love playing Big Band music and I want to carry on my family’s tradition of playing jazz.”
~ David Viemeister

“I play bass. I’ve been with the band about six months. Dave asked me to come down because they needed a bass player. I read music, which is unusual for bass players!”
~ Jerry Lehr

Retired orchestra teacher and director, Thelma Wilcox, plays piano for the band. Her Focus In interview can be found here. 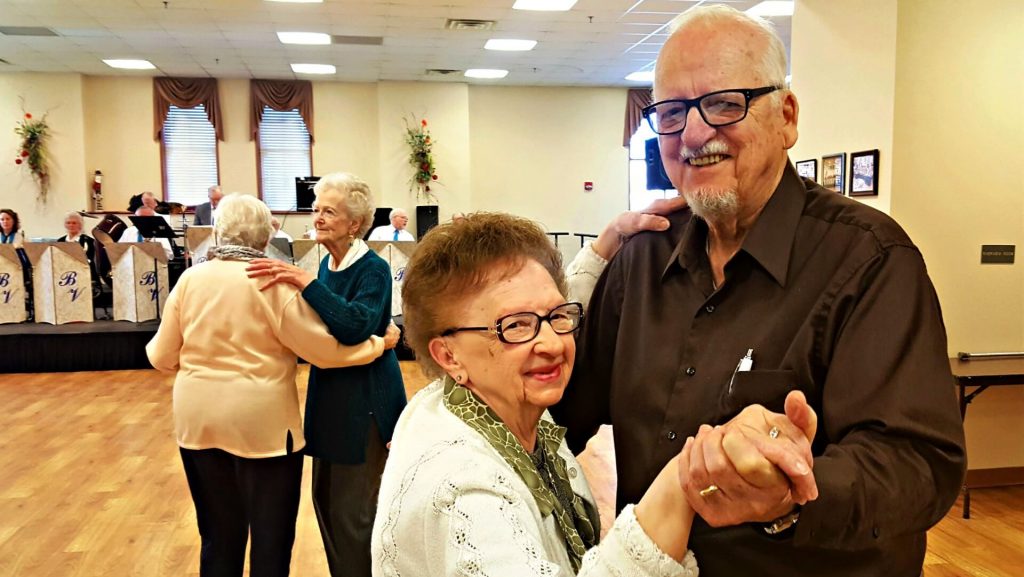 A recent Friday morning dance at the Janesville Senior Center

Tell me about the dance.

Every Friday morning, from 9:30 until 11, we get a group of seniors who fill the tables and fill the floor with dancers. We basically grew up with the music of the 40’s and 50’s.

A few words shared by a couple of seniors in the audience:

“I’m married to Michael, the drummer. They’re wonderful musicians. Everybody gets along perfectly! We’ve been coming here for 15 years! The lady who used to play drums stopped, so my husband took her place.”
~ Bonnie Ryder

How does this music benefit the seniors in our area?

Do you enjoy directing?

Absolutely! I’ll keep doing it for a while. They’ve put up with me for seven years, so as long as they’ll have me.

What is it about Rock County that you love?

I like the size of the city. It’s just a good, right size for us. It’s got everything you’ll ever need. Plus, we had the grandkids. But, now they’re grown and off on their own. You know how that goes!