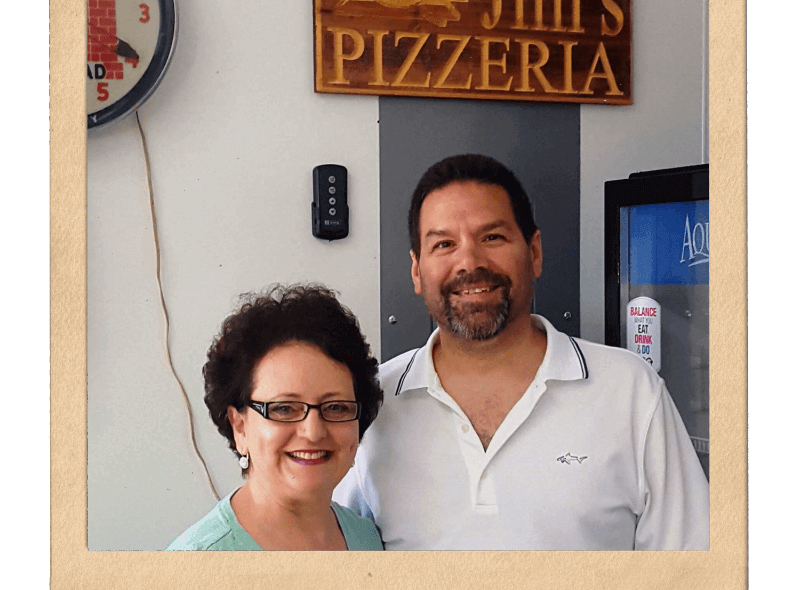 How did you both end up in Janesville?

Christina: I was born in Sicily. My parents left their small community there, small like Footville. My mom said goodbye to everyone and didn’t know if she would be able to come back. I came to America on Sept. 11, 1962, short of 6 months old. My parents were in their early 30s. They brought us to Rockford, Illinois. That’s where I grew up.

I met Jim in 1983 at a family friend’s in Rockford. He had just turned 21. There were so many people there and my parents brought me because I was the oldest. I was brought up when the girls didn’t call boys. Boys were supposed to call me. But, when I left that evening, I said to him, “Well, give me a call sometime.” And that was the hardest thing to do because I didn’t know if I was going to get in trouble by my Dad by saying that, or what! But, I didn’t know if I would see him again, and if he didn’t call me, then … well. But he did!

My uncle sat me down after he had met Jim a couple of times and said to me, “If you really, really like this boy, and you’re going to get married someday, are you ready to be committed to the business?” And I thought, “Oh, yeah, I can handle it no problem.” You know when you’re in love you think everything is going to work out fine, everything’s easy and rosy. Now here we are. I’ve been here (in the business) 33 years!

Jim: My dad had a vineyard in Sicily, and times were tough with drought. My father had been born in Beloit while his folks were here for work to make some money, and go back to the “old country.” But he didn’t know that fact until he was a young adult. Then someone told him he was an American citizen and encouraged him to come here. In those years factories were booming and he knew he would have opportunity. So then my parents came over here on a boat. The trip took 30 days. They didn’t know English so they had to communicate with hand gestures at first.

My parents owned a restaurant in Beloit. They’d been in business many, many years. I was born and raised in Beloit, Wisconsin. My siblings and I all started working in their restaurant, then when it got to be too much we all spread out. So I came up to Janesville and worked at my sister’s place, Tony & Maria’s, on Milton Avenue.

I was working there in 1978 and ’79 and everybody said, “We need a pizza place across town. We need something on the south side.” My dad spotted a little gas station here and said, “It’s time to be on your own.” Because, even though I worked for my sister, he still did not like us working for somebody else. He wanted us all to be on our own. My older sister lost some good workers when we moved out.

So Sam, my younger brother, and I became business partners, and in 1980 we started the business! It was at 1103 Center Avenue, there was a little shack here. Two years later we built on the dining room. Sam retired in 2015, about a year ago.

Christina: When I met him, and while we were dating I started coming to Jim’s Pizzeria with my parents. Then we were married in 1984 and I started helping out right after our honeymoon. We weren’t as busy back then, and we didn’t have as many employees. As the years moved on, we started growing. Business was good in the 1980’s and ‘90’s. General Motors was up and running, everybody was hoppin’. When we added the TV in the dining room, that brought in the sports crowds for the Packer games or to see the Badgers.

Jim: Times were good. Those were the good old days … for many, many years. We had GM and we had the football crowds from the high school games.

What changes have you seen over the years?

Jim: The big key was GM. When it closed, it took a big toll on everybody. Not just me, but all the other pizza places. Everybody was delivering down there. I mean, when that shut down, we noticed a big slump. But now, it’s starting to rebound back. I think Janesville is starting to come back. I don’t know if it’ll ever be like the good old days, but small factories are coming in. Baby steps.

What do you see happening in the future?

Christina: We have the kids working with us and we’ll see what the future holds for us. Hopefully, our son can come in with our daughter, and with employees, and we can pop out of here like on a Wednesday night to see how they manage. Maybe we can take up to a few days a week. We’ll see how they do. We’ll keep the phone near us in case there’s that “help!” It would be nice someday, not to be here until we’re 70!

Jim: This will be our 37th year. 37 years is a long time. There are only a few of us left; Tony & Maria’s, Jim’s and Sam’s and Lisa’s. All the rest are just franchises. Maybe the kids will take over eventually, we’ll see. We plan to stick around as long as we can.