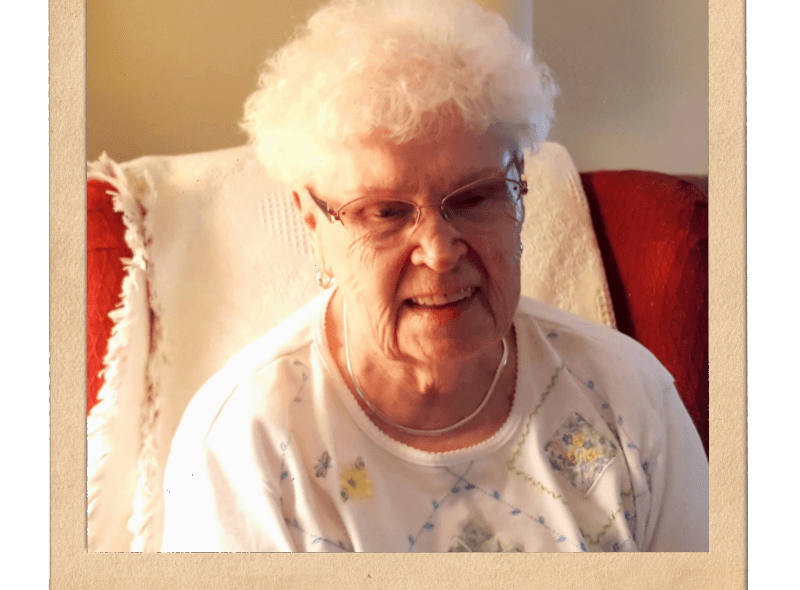 Arlene Shea reminisces about what downtown Janesville was like in the 1950s, including time she spent working at the Woolworths store.

When did you come to Janesville?

I grew up in Stoughton but, my husband was a Janesville native. I met my husband when I was a senior in high school. I got a job in 1949 at the JC Penney store. We were married in 1951 at St. Patrick’s church.

Downtown Janesville in the 1950’s was a busy, fun happening place!

The department stores were all down near the river. Right across from Woolworths there was a large Sears store on South Main. There was a JC Penney’s as well as a Singer Sewing Machine store. In that era, the cashier, who handled the money, would be up on the balcony. The clerk would put the customer’s money in a cup on a cord, which was connected to the balcony. Then she’d tug on the handle of the cup and send it on up the cord to the cashier to count and send the change back down! That’s how it was done.

It seemed the downtown had shopping for everyone. There were several upscale women’s dress shops located downtown. We had a beautiful Austwick Department Store, women’s dress shops like Golden Eagle, Elliots, Hagen’s and Anderson’s. They had beautiful window displays of wonderful fashions! We loved to go window shopping down the street. For men there were some upscale stores: Bostwicks, the Hub and Rayberg’s.

There were also a variety of smaller type stores downtown. The three jewelry stores I remember most were J.J. Smith’s, Zale’s and Dubes Jewelry, which is still there with Mr. Corey! He’s really a nice guy. We had hardware stores, like Douglas hardware, drugstores and May’s Drug next to Woolworths and Kealy’s up on the corner, as well.

For food and groceries, there were a few meat markets downtown. At the Five Points, there was a meat market where hamburger was only $1 per pound! It was so fresh and tasty! There was a little Schoeberle’s grocery store near the meat market. And he had a little truck which he would use to deliver groceries to people.

We’d also have fun going to the bowling alleys.

In those days, there were several restaurants and taverns at the Five Points. We enjoyed Sizzlin’ Grill, and The Took family had a restaurant near the library, which is now the Senior Center. There was another wonderful restaurant on the corner called Krause’s Town and Country, and they had a large dining room where we went for many beautiful Christmas parties and such. At the Monterey Hotel they had a nice bar room and restaurant where you could get a Southern Comfort Old Fashioned and a prime rib dinner. It was a great place to go!

Janesville had a busy and bustling in downtown, a wonderful place in the 50’s.

We had 5 children so our lives were mostly involved with raising the children and working. My husband worked for the Wisconsin Power and Light. Thankfully, I got a job at Woolworth’s in downtown Janesville, because my mother-in-law was the manager of the toy department there. So, I worked every Friday night and every Saturday. That gave me money for spending and for Christmas. Stores were not open on Sunday. We’d have our Sunday best clothes, Sunday dinner and afternoons were for visiting relatives and friends.

They needed part-time help, because back then, without computers, people had to count the inventory and keep track in the books. We had permanent displays that were sent in to us by the company and we had to set those up. We took turns running the register, as well. All the current fashions would come in and we’d create displays. They always took pictures of those displays. I’m sure there are some photos out there, maybe in the Rock County Historical Society’s archives.

We were paid cash in an envelope every Friday. It was a fun job. I loved working there during the holidays in the back room. We used to make Easter baskets and various holiday displays. One Saturday I did nothing but blow up helium balloons all day! They were 50 cents a balloon, and we would tie them on the little kids’ wrists so they wouldn’t blow away when they went out the door.

Occasionally, we had trouble at the store. You know the old saying,” You can’t tell a book by its cover”? Well, that is so true. We kept finding packaging for doll clothes in the toy department, but no doll clothes. I had in my mind that these two little girls were running off with the clothes.

One day I was at the register and this lovely looking older woman came up. She had a beautiful, nice hairdo and a lavender colored plaid blazer. I remember thinking how it looked as if it must’ve cost a fortune! She came over, laid the merchandise on the counter and I rang it up. After she left a coworker came up and asked me, “Did that woman pay for those doll clothes?” So I caught up with the woman and told her that if she was going to pay for those doll clothes, she needed the package. Here was someone you would never think would be shoplifting!

We also had a really tall, over six-foot young man who would come in fairly regularly. We knew he was stealing. So we’d keep watching him to see what he’d do. The minute you would lose your attention to a customer, he’d grab the latest board game under his arm and take off out the front door! We told Mr. Kade, our manager, so he approached the young man the next time he showed up, and told him he wasn’t welcome in the store ever again. That’s how those situations were handled back then.

I remember when the buyers would go to New York, they’d bring back all the latest, beautiful Christmas decorations from Germany and Italy. We had white marble statues from Italy, beautiful copies of the great statues, Michelangelo’s David and the three women, Faith Hope and Charity statues. The sold for $29.99 and $39.99. One of my coworkers made the David statue a little skirt to wear because she didn’t like the nude statues! Haha

From Italy, I bought a beautiful, fine wool sweater vest, black with long sleeves and a belt. I would wear my high heels and pearl necklace. One wouldn’t think you could get such nice clothing from a Woolworths!

What did you do after working at Woolworths?

I saw a job in the newspaper for the Montgomery Ward’s catalogue store up the street. It was part-time, afternoons, and that way I could be home with my children after school. The store manager asked me if I’d like to pay into retirement, so I’d have something down the road, so I did.

Then, the mall was built and the first Kohl’s came, and I worked there for about 5 years. Eventually, I became the manager of the catalogue department.

Later, that department closed, so I went back to Woolworths. I continued to work full-time, which in those days was about 30 hours. It was much different then. When the first discount stores came in, they got so much of the merchandise from Taiwan. If you did that, you’d have to take a lot of their cheap plastic toys before you could get the quality goods.

Looking back, I really enjoyed my work at Woolworths. It was fun being downtown.

Over the years, what are some of the changes you’ve witnessed in our community?

I found one of my old paychecks, and my pay that week was $11. I probably worked for less than a dollar an hour then! So wages have sure changed, as has the price of a home. Back when we were first living here, you could buy a house for $10,000 or have a new one built in the neighborhood near Craig High School for about $26,000! Now, when I see the prices, I’m amazed by how they’ve really increased.

The world has changed so much because of technology. I was thinking about the shopping experience and how computers have changed everything from the old days. People shop so much now online, so that’s quite different from when everyone would go out to the store. And my children drive a long way to work; one doesn’t find work around where they live as much as in the past. Families have also changed from the nuclear family, which was the norm, to the various types of families today.

It’s certainly no longer the small town that I used to know, but, it’s still a really nice, family-friendly town.